Lord of Shang-Yang
Ruler of the Western Provinces

The other eight Cathayan Dragons

Zhao Ming, the Iron Dragon and the Lord of Shang-Yang, is a member of the family of immortal Cathayan Dragons that rule the empire of Grand Cathay. Zhao Ming has been tasked by his father the Dragon Emperor, and his mother, the Moon Empress, with governing Cathay's Western Provinces and has chosen as his capital the great trading entrepot of Shang-Yang.[1]

"There's more than iron in Zhao Ming's blood. He rules a province too close to the Ogre's mouth - a land blighted by fell minerals and overrun by cloaked vermin. It's got to him! His sisters know, his brothers suspect... but his mother, the Empress, will not let anyone besmirch his name."

As one of the rulers of Grand Cathay, Zhao Ming is an immortal Cathayan Dragon who can take on Human form. This makes him an incredibly powerful combatant, an amazing wizard, and a natural leader of Men.[1]

The Iron Dragon rules by the grace of the Dragon Emperor and the Moon Empress over the Western Provinces of Grand Cathay and the Ivory Road that leads westwards into the Mountains of Mourn. A hardened frontier warrior, Zhao Ming maintains the western edge of the empire and keeps the Desert Clans in order.[2] This area is a less defended, and also less chaotic, region of the mortal world. The Western Provinces contain beasts and men of all sorts coming from further west, as well as facing regular incursions by Skaven and Ogres from the Warpstone Desert and the Mountains of Mourn. The creation of the Great Maw when that meteorite fell from the sky centuries ago still hangs heavy over this region, even as an uneasy peace is maintained.[4]

Many trade caravans leave Cathay from Zhao Ming's domain, particularly to and from the mighty city of Shang-Yang -- seen as a gateway to the lands of the west -- and should they be successful in their journeys the Iron Dragon reaps immense wealth and prestige. This is particularly important to the Iron Dragon as he is not as beloved by his father as his older sister Miao Ying, the Storm Dragon who rules the Northern Provinces, although rumours whisper that the Moon Empress has a soft spot for her son.[6]

Zhao Ming is a natural-born warrior, though less innately skilled than his sister to the north. He is a talented alchemist and shows great preference for the art among his armies, leading to the presence of cabals of Cathayan Alchemists -- in particular the "House of Secrets" - in Zhao Ming's realm. This causes much frustration in those who find the insidious magics worrying for the empire,[2][4] such as the Jade Dragon Yuan Bo, who sees the encouragement of sorcerous organisations outside of the direct control of the Celestial Court as dangerous for the empire. These sorcerers help the Iron Dragon in his experiments, and many magical weapons and armour are forged in the cities of the Western Provinces.[6]

These cabals use the city of Shang-Yang as a base for their expeditions into the Warpstone Desert, and some never return. Others come back loaded with exotic ores that end up in the forges, with the Iron Dragon as enthusiastic as any of the other alchemists to begin experimenting. Zhao Ming is as skilled an artisan as those drawn to him since he has had a Dragon's lifespan to perfect such expertise and research the mysteries of arcane metallurgy.[6]

The strange elements found in the Warpstone Desert have only deepened Zhao Ming's fascination with and understanding of alchemy. But some among his subjects now fear that his mind has been permanently damaged from exposure to these alien materials, and any eccentricities or erratic behaviour he displays is very worrying to his siblings.[2][4] While the other Cathayan Dragons are usually cold-blooded and emotionally detached from the short-lived mortals they rule, the Iron Dragon will share a jape, or even a drink with his followers. Such mortal behaviour inspires loyalty within his legions but makes him stand apart from his kin.[6] Furthermore, Zhao Ming pays little mind to edicts from his father and Yuan Bo stating that the alchemists in his domain are not sanctioned, and in fact finds it amusing to cause Yuan Bo so much worry.[7]

All this makes Zhao Ming a far more gregarious character than his eldest sister, Miao Ying, and he gets especially offended by her aloofness.[5] In any case, even if his siblings look upon him with suspicion, the Moon Empress is very fond of her son and will shield him from ire when the family assemblies become less than harmonious.[6]

Dealings with the Ogres

At some point in the past, Greasus Goldtooth, then the newly crowned tyrant of the Ogre Goldtooth Tribe, arranged a meeting between Zhao Ming and himself in the Tower of Ashshair. Greasus' predecesors had grown rich from plundering the trading caravans that crossed the Ivory Road from Grand Cathay westwards to the Old World, but Greasus was far more ambitious than they. At the meeting, the Ogre tyrant made a joke about the fact that he, like Zhao Ming, had a "difficult" relationships with his father, whom Greasus had killed and eaten to ascend to tyranthood.[8]

While Zhao Ming's retinue were outraged at the audacity a mere Ogre had to mock their immortal ruler, the Iron Dragon himself paused, then let out a powerful guffaw, which was quickly joined by Greasus' own belly laugh. That day Zhao Ming and the Ogre tyrant reached an agreement: Cathay's caravans could move through Goldtooth territory, as long as they paid a toll. This allowed Grand Cathay to better trade with the other Human realms of the Old World. Years later, Greasus would unify all of the Ogre Kingdoms of the east under his rule, claiming the new title of "Overtyrant."[8]

In Chinese, the Iron Dragon's name is written with the characters 昭 (Zhāo - "Dawn; to make clear/illuminate") and 明 (Míng - "Brightness"), which can be translated as "Dawn's Brightness" or "Illuminating Light".[3] 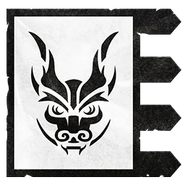 The war banner of Zhao Ming

The banner of Zhao Ming as lord of the Western Provinces of Grand Cathay
Español
Community content is available under CC-BY-SA unless otherwise noted.
Advertisement