Warhammer Wiki
Register
Don't have an account?
Sign In
Advertisement
in: Anointed, Cult of Sigmar, The Empire,
and 4 more
English

"We must be ever-vigilant, for if we become unwary and weak the enemies of mankind will devour us utterly. Place your faith in Sigmar to protect you, place your trust in your Emperor to lead you, and put your strength in your sword to deliver you from those who would destroy your Empire."

The Warrior Priests of the Church of Sigmar are a warrior-sect of Sigmarite Priests whose duty is to not only lead and inspire Imperial troops on the field of battle, but also to minister to their spiritual needs against the Empire's foes.

Sigmar is a Warrior God, and to pursue his creed is to live a life dedicated to battle for the good of all Mankind. The Cult of Sigmar demands that its followers fight all forms of evil in the world with the strength of their arms as well as their faith and many of its priests accompany the Empire's armies when they march off to war, following and honouring that creed.[1a]

It is thanks to these tireless warriors that a rousing speech by a Warrior Priest of Sigmar has restored the troops' faith, brought hope to a seemingly lost cause, or prevented a mutiny when the words of even the most respected commanders had fallen on frightened and angry ears. Throughout the Empire it is considered only right and proper to honour all the gods and even those priests who serve only one deity will still show respect to other gods in appropriate situations or when their portfolio is predominant. But where the older gods are seen to care little for the plight of Men, Sigmar is the patron of the Empire and its people, the reason why the people of the Empire often refer to themselves as Sigmar's People and venerate the sigil of the Twin-Tailed Comet.[1a]

This remains true in every province of the Empire, even in those places where Ulric, Taal, and the other gods are more actively worshipped than the Heldenhammer. The High Priest of the Cult of Sigmar is known as the Grand Theogonist, and he is served by two Arch Lectors. Beneath these ecclesiastical officials, all three of whom serve as full Electors of the Empire, are the Warrior Priests. Almost every town and village in the Empire has at least one shrine dedicated to Sigmar and so Warrior Priests of the deity are a common sight wherever the writ of the Emperor's law extends.[1a]

In battle, the divine power of Sigmar stirs within their hearts and his divine might is their command, allowing them to perform extraordinary miracles in the name of their god, so long as their faith in him remains strong. A Priest of Sigmar can unleash the Heldenhammer's wrath to smite creatures of darkness like Daemons and Undead or even less malevolent beings like Forest Spirits, call upon divine protection for fellow Imperial warriors engaged in battle to enhance their defences or even return a badly wounded comrade from near death, miraculously healing all his wounds. To see such blatant signs of Sigmar's favour fires the hearts of all Men and leads them to redouble their efforts to defeat the foe. Warrior Priests of Sigmar normally wear mail or full plate armour underneath their holy vestments, wield the mighty warhammers that are the favoured weapon of Sigmar, and ride into battle atop powerful Imperial warhorses. Among the most commonly employed divine powers of a Warrior Priest are prayers.[1a]

The following two prayers are solely taught by the Cult of Sigmar:[2a]

"These men wade into battle with conventional weapons, but can also call powerful magical forces to decimate their enemies."

Each of Sigmar’s primary orders gives importance to different prayers. The orders of the Anvil and Torch, the largest orders of the Cult, practise defensive rites, focusing upon catechisms that protect the body and mind from harm or influence (Sigmar the Anvil). The Silver Hammers follow some of this doctrine, but also teach prayers to smite Sigmar’s enemies, knowing that the best defence can often be offence (Sigmar the Hammer). Lastly, while the Cleansing Flames believe they must take Sigmar’s purifying fires to their enemies, they also teach warding prayers, designed to protect the Order from the foul corruptions of the Ruinous Powers (Sigmar the Purifier). The other Orders of Sigmar use variations upon these themes, with most preferring defensive prayers over the offensive.[2b]

Though they do not possess the might of god-touched warriors such as Chaos Chosen and Grail Knights, some Warrior Priests can beseech Sigmar to imbue them with great strength. However, this surge of vitality is very short lived...[3][4] 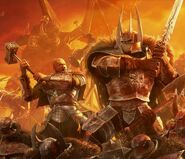 A Warrior Priest fighting a Chaos Warrior of Khorne

A Warrior Priest of Sigmar fighting a Chaos Chosen of Tzeentch

A Warrior Priest of Sigmar 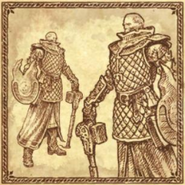 Portrait of a Sigmarite Warrior Priest 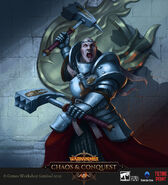 A pair of Warrior Priests guarding a Sigmarite Church

A Warrior Priest (Mark of Chaos)

A Priestess of Sigmar 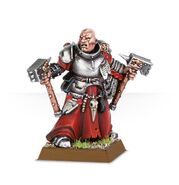 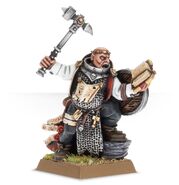 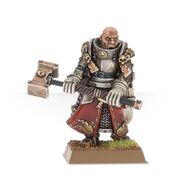