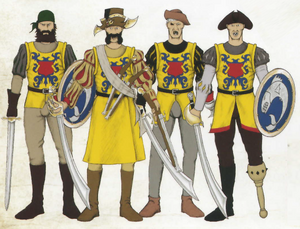 Van Klumpf's Buccaneers, also known as The Murderers out of Marienburg and The Scourge of the Reik are a notorious mercenary regiment in the Empire.[1a]

Their origins are unclear, however its generally thought that they originated in Marienburg due to their uniforms, which display the colors of the city-state. One theory states that Bartolomeus van Klumpf, the leader of the regiment, is the dispossessed son of a Marienburg noble. Since they arrived in Altdorf in 2545, they have become well-known for brutality. Their reputation has increased greatly over the years, but so has their fee.[1a]

The Buccaneers are equipped with time-worn weapons and drab clothing, but are nevertheless an effective fighting force. Their are yellow, blue, and red and their device is the Ripper Fish.[1a]

Retrieved from "https://warhammerfantasy.fandom.com/wiki/Van_Klumpf%27s_Buccaneers?oldid=95268"
Community content is available under CC-BY-SA unless otherwise noted.