A Vampire Count is a powerful Vampire who has risen above their kin as a leader and champion, whilst being not quite as powerful or influential as a Vampire Lord.

Vampires who have reached the level of Count have grown, matured, and consolidated their powers and abilities. They are no longer the terror of mere towns and hamlets, nor are they content to prey on isolated individuals. Their influence is felt across the land, and they dominate mortals, Undead and several of their Vampire kin as well. A Vampire count is nothing like the wild, bestial creature he started out as; instead, he is a patient and meticulous hunter of men. He is also a man with a plan and the means to carry it out, and he fears no rag-tag group of adventurers who think they can stop him.[1]

Seafaring Vampire Counts are instead known as Vampire Fleet Captains.[3] 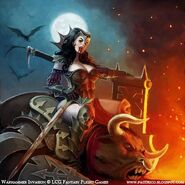 Retrieved from "https://warhammerfantasy.fandom.com/wiki/Vampire_Count_(Title)?oldid=129179"
Community content is available under CC-BY-SA unless otherwise noted.