Warhammer Wiki
Register
Don't have an account?
Sign In
Advertisement
in: Dogs of War, Dogs of War Military, Empire Regiments,
and 3 more
English

The Cursed Company of Richter Kreugar the Damned is an ancient mercenary company of Undead, rumoured to enslave those who fall to their deadly blades to eternal servitude.[1a] The battle-cry of Richter Kreugar has long been forgotten by the people of the Old World. The silence of the grave hangs over the Cursed Company as it traverses the land, marching to war accompanied only by the sound of creaking ancient leather and the scrape of rusted metal.[1b][2a]

The dark legend of Richter Kreugar the Damned and his Cursed Company has been told for countless years across the Empire. A tragic tale of betrayal, greed and revenge, the details and truth behind the stories have long become hazy and unclear as the story has been told and retold for generations.[1a]

The most common tales revolving around Richter Kreugar's tragic curse tell of a young mercenary captain, proud, talented, and ruthless. He hired out his services freely, uncaring who he fought for as long as the price was right. Centuries ago in the history of the Old World, Richer was said to have allied with a powerful Necromancer, aiding him in his diabolical campaign against the Empire, terrorizing the heavily forested area around Wolfenburg.[1a]

Within the leather-bound annals of the Historiata Imperiatus, it is said that the Empire army of Wolfenburg was suffering horrendous casualties in a war of attrition that they could not hope to win. However, they struggled on regardless and began to wear down the Necromancer, taking the offensive and pushing him deeper into the forest, denying him the time needed to strengthen his Undead forces.[1a]

Seeing the Necromancer faltering, Richter accepted the bribes of an Empire agent, the calculating young mercenary seeing a chance to make some easy money and be on the winning side. As the titanic battle hung in the balance, Richter played his hand, striking out at the foul Necromancer, who fell beneath his blade. However, with his dying breath the unholy sorcerer gasped a curse that was to be the eternal undoing of the enterprising sell-sword.[1a]

Before his horrified eyes, Richter's skin began to wither and within moments he collapsed to the ground, a lifeless pile of bones and armor. The day was won for the Empire forces, and the tale of Richter's betrayal may well have been forgotten, had his death not been accompanied by a tragic twist.[1a]

The very next night, Richter rose from the ground. He stared at the world with his hollow eyes, and all he surveyed appeared in shades of gray. In anguish and despair, Richter saw his own skeletal limbs, and the full horror of the Necromancer's incantation began to dawn on him.[1a]

As a result, Richter stalks the Old World and beyond. Hundreds of years since his death he is still seeking oblivion and peace, yet he is never able to achieve his final rest. Countless times he has been cut down, only to wake the following night to his never-ending, hellish torment. A terrible element of the curse is evoked each time he slays an enemy, for his defeated foes rise immediately to serve him in undeath, slaves to his will. He travels the world, living out a tragic parody of his former mercenary career, fighting wherever he finds battle. His anger and despair momentarily lost in the bloodshed, he continues his doomed existence in the desperate hope that one time when his skeletal body is slain, he will finally know the relief of true death.[1a]

The Cursed Company fights in a unit of 10 to 30[2a] Skeletons, including Richter Kruegar, a standard bearer and a musician. Any army other than Bretonnians, Vampire Counts and Tomb Kings may hire the Cursed Company, as Richter has an eternal hatred for those who subjected him to his fate, and so will not fight for the Undead.[1b][2a]

Richter Kreugar is armed with a shield, heavy armour, the Dark Gem of the Cursed (which glows a blood-red shade that intensifies when a blow is directed towards Richter, protecting him from harm) and his unholy sword, Blight (a powerful blade, centuries old and suffused with unholy magic). The Skeletons of the Cursed Company are equipped with shields, light armour and hand weapons, and the standard bearer carries the Banner of Malediction, a sinister parody of Kruegar's original, disgraced mercenary company banner that has been carried for centuries by various enslaved warriors.[1b][2a] 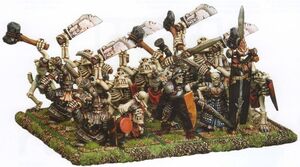