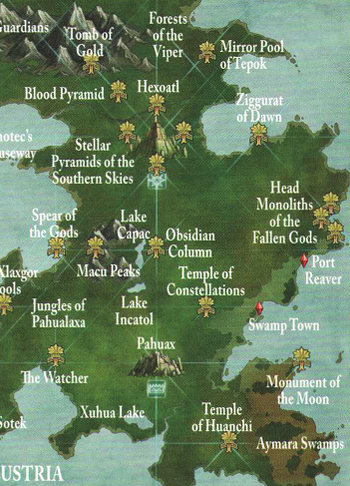 Swamp Town is a squalid settlement on the Isthmus of Lustria. A group of gamblers founded it in 2064 IC, fleeing their debts in Port Reaver. As time went on, it grew from a ramshackle shanty town into the busiest trade destination in Lustria.[2a]

Despite the brothels and taverns making up its decadent core, Swamp Town is no place for excess. With a name the inhabitants had shown surprising honesty with, Swamp Town is malarial and grubby. Its crudely built huts and hovels are riddled with termites and slimed with mould; even the newest of them stink of decay as they rot slowly back into the ground from which they had sprung. They stink further as they decompose, each of them filled with the rank odour of rotten vegetation and other, more revolting things. But if the air indoors is dank, the air outside is even worse. After what a voyager had experienced crossing the ocean, and the clean air of sea breezes, the humidity here is choking, an asthmatic fog that drones with the constant hum of countless biting flies. After just two hours ashore, those without tough, leathery skin find themselves covered with an agonizing itch of bites and incisions.[1a]

Past the rickety bamboo pier, even the streets ooze. Mud and shit suck hungrily at one's feet with every cloying step, insinuating itself into the damp leather of boots and spilling over the cuffs.[1a]

In addition to the businesses mentioned above, an apothecary sells lotions that ward off the worst of the biting insects. The shop, however, isn't so much a building as a stall that has gradually evolved. Its walls had been made by the two men who had built shops on either side of it, and the rustling palm thatch of its roof seems more to have grown pretty much by itself. Still, despite the cramped conditions, it's always a relief for newcomers to be beneath shade, the disturbing smells of the place a small price to pay for a moment's respite from the midday heat. That being said, the smells are disturbing.[1a]

The peddler obliviously grinds up the pastes and potions - from which he makes his living - in this very room. Strings of multicoloured herbs and vegetables hang from the ceiling in a thick forest of raw materials, interspersed here and there with the dried carcasses of lizards, or monkey paws, or other, stranger things.[1a]

Beyond the dangling tendrils of this confusion sits the great stone bowl of the shopkeeper's pestle and mortar. It squats against the far wall like some primitive idol, its owner seating over it like a priest over a sacrifice as he prepares orders.[1a]

Retrieved from "https://warhammerfantasy.fandom.com/wiki/Swamp_Town?oldid=112064"
Community content is available under CC-BY-SA unless otherwise noted.