Agriculture, Eels, Beer
Stromdorf is a market town in Reikland. It is best known for having an excessively rainy climate.[1] 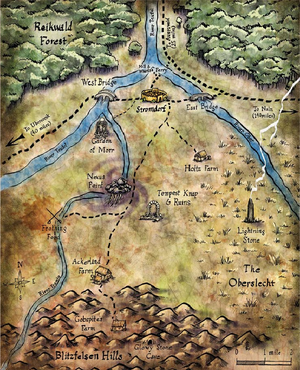 Stromdorf is located on the southern edge of the Reikwald, near the confluence of the Teufel, Ober, and Tranig rivers, which flow out of the Grey Mountains towards the Reik. To the south of the town is a relatively fertile lowland plain. Grains and hops are grown here, and short-horned cattle are raised. East of this is the Oberslecht, a dismal marsh where a race of wildmen are rumored to live. Those brave enough to enter the swamp go there to harvest cloudberries, a type of berry that is used to brew Thunderwater Ale, one of Stromdorf's few exports.[2]

Beyond these are the Blitzfelsen hills, and past that the towering Grey Mountains. The only rise between them and the town is Tempest Knap. Atop the knap are a few crumbling stone ruins. It is said that a proud sorcerer once lived there, and the gods punished him by striking his tower down. Even now, lightning commonly strikes the summit, and the hill has a haunted reputation.[2]

Due to the horrible weather, few new people come to Stromdorf. Thus the town remains an impoverished backwater when other towns in Reikland thrive. The people have a reputation as inbred fools who are quick to anger and complain about everything (except the weather).[1]

Despite the fact that is on the River Teufel, Stromdorf does not see very much revenue from trade. This is because most travelers would rather pass through the rainy and unpleasant area quickly than stay there for a night. Stromdorf sees some income from the farms surrounding it. Wool was once an important export of Stromdorf, but around a hundred years ago, goblin tribes drove most of the shepherds out of the hills. The few remaining sheep there are hardy, but produce poor quality wool and meat.[1]

Stromdorf does have a few exports, though. The Reik Eel, a large species of eel, thrives in the marshes and rivers around Stromdorf. These eels are skinned, smoked, barrelled, and exported. Another export of Stromdorf is Thunderwater Ale. This potent beer has been brewed by the Brenner family for generations. It is well-regarded by beer connoisseurs across The Empire, and is even known to have been purchased by Dwarfs from Karak Azgaraz.[1]

Stromdorf has a town council and a burgomeister, who is appointed by the von Jungfreud family. The current burgomeister is Philip Adler. A textile merchant from Ubersreik, he was appointed by the von Jungfreuds, who hoped the new blood would invigorate Stromdorf's economy. To a certain extent, they were correct. Adler used his connections in Ubersreik to foster trade between the two towns.[1]

However, recently, Adler has shut himself away. Anyone attempting to do business with him must go through his watch captain, Arno Kessler. This reclusive behavior has lead to the merchants from Ubersreik losing interest in trade with Stromdorf.[1]

Retrieved from "https://warhammerfantasy.fandom.com/wiki/Stromdorf?oldid=86891"
Community content is available under CC-BY-SA unless otherwise noted.