Warhammer Wiki
Register
Don't have an account?
Sign In
Advertisement
in: Anointed, Cult of Sigmar, The Empire,
and 4 more
English

The Sisters of Sigmar, also known as the Sisters of Mercy, reside in their convent situated on Sigmar's Rock in the centre of Mordheim. Protected by their faith, and the fortified walls of their convent, the Sisters survived the great cataclysm. They can now be seen collecting the precious wyrdstones to protect humanity from itself.[1a][2a]

For centuries the nobility of the Empire has sent its wayward or troublesome daughters to the Order of Merciful Sisters of Sigmar, to be initiated into the only Order of priestesses dedicated to the Empire's patron god. Though once much loved by the common people, the Sisters have seen their popularity wane in recent years. Rabble-rousing Witch Hunters have denounced them as witches and driven away by the very peasants they seek to help. Many of Sigmar's priests wish to disband the Order altogether, claiming that women have no right to teach the holy word of Sigmar. Even the Grand Theogonist, ostensibly the chief authority over the Order, has cooled towards the Sisterhood, denying the throne to Magritta of Marienburg who was brought up by the Sisters and said to be sympathetic to their cause.[1a][2a]

Of all the inhabitants of Mordheim, only the Sisters of Sigmar were prepared for its destruction. Seeress Cassandora foretold the disaster, and at their nightly vigil the Maidens of Sigmar heard the voice of Sigmar speaking in their dreaming minds. When the blow finally came, the Sisters gathered beneath the great temple dome of their convent which, well built and fortified as it was by the prayers of the Sisters, protected them from the fire and fury of their master's ire. The Sisters believe they have a holy mission, a task that they have been set by Sigmar himself and to which they must submit themselves body and soul. The sacred duty is to gather up the wyrdstone and hide it deep beneath Sigmar's Rock in the vaults of their convent, where, shielded by a great depth of solid granite, and guarded by the eternal prayers of the Sisterhood, it will cause no harm to Sigmar's people.[1a][2a]

It is a nigh hopeless task, for there are few Sisters and countless shards of stone. Worse still, there are many who want the stone for themselves, to take from Mordheim and spread its contagion amongst the cities of the Empire. The warbands of the Sisterhood are led by tough Matriarchs, each accompanied by a body of warrior sisters. The training and harsh discipline of the convent includes mastery of martial as well as ecclesiastic skills, for mastery of the body is but the first step towards the mastery of the soul. Their favoured weapon is the warhammer, the instrument of Sigmar, seen as his holy symbol, alongside the twin-tailed comet.[1a][2a] 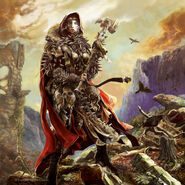 Depiction of the Sisters of Sigmar from Mordheim: City of the Damned. 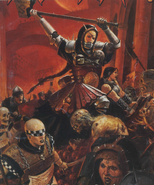 Model of a Sigmarite Matriarch.