"‘Heed my words, human,’ the dark elf lord spoke, his voice like burning coals stirred in a grate. ‘For you are not worthy to hear them twice.’
‘I am Rakarth,’ the dark elf announced, his hateful voice boastful and haughty, ‘Called Beastlord.’"

Beastlord Rakarth of Karond Kar[1a] is the most accomplished Beastmaster in the whole of Naggaroth.[2a] He is known as having an almost 'magical' compulsion over any and all beasts across the world.

The Dark Elves have always made great use of enslaved monsters, both for their fleets and for their land armies, but although there have been many famous Beastmasters in the past, none have approached Rakarth's consummate skill or expertise. It is said that the dungeons of Karond Kar are filled with creatures that Rakarth has tamed, and that amongst them can be found one or more of all of the creatures known in the world.[1a]

When Rakarth was just a child his father was attempting to break and train the mighty Black Dragon Bracchus. However, the Dragon was more than a match for even his father's considerable skills and in a fit of rage the Dark Elf Beastmaster ordered the Dragon to be slain. Rakarth made a deal with his father to allow him to keep the monstrous beast if he could ride it, and his father duly agreed.[2a]

Rakarth fixed the Dragon with his piercing stare, and there was something in the young Dark Elf that the Dragon recognised. Bracchus saw the innate cruelty and bloodlust of Rakarth, and knew that a kindred spirit approached. The Dragon acquiesced to Rakarth without a fight, and he has ridden Bracchus into battle ever since.[2a]

Assault on the Old World

In 1974 IC, Beastlord Rakarth ravaged the coasts and interior of the Old World at the head of a host of War Hydras and Black Dragons, razing ports and cities and taking the survivors as slaves for Naggaroth. This onslaught culminated with the invasion of Bretonnia, which climaxed during the siege of Castle Brionne, whose defence was led by the old Duke Corentin, known as the Paladin of Maelys, the Marcher-Lord of the Silver Plain, the Defender of Fort Adeline and the Champion of Gaelle's Virtue.[4]

Rakarth demanded to be given a fifth of the city's population, but Corentin, wishing to face a final foe in one last glorious charge before falling prey to old age, refused. The Duke's knights desperately tried to keep him away from the frontlines to avoid his sacrifice. Alas, once they were all annihilated by the Druchii army and its monsters, Corentin had his attendants arm him and he charged in alone as well. The exact outcome of this battle is unknown.[4]

Over a thousand years ago, Witch King Malekith's Black Dragon, Kaliphon, fell with its black heart pierced by a lance. Hundreds died to slake the rage he felt upon losing his mount. Since then, Malekith was unable to ride a Dragon again, despite many nobles offering him their own mounts as gifts. Instead of accepting them, Malekith had a terrible chariot constructed, to be pulled by Cold Ones and outfitted with scythes in its wheels. In his rage, he decreed that only he would be allowed to ride a chariot in battle, and so had all the others destroyed.[6a]

Centuries later, however, a group of Shades located an un protected nest of Dragon eggs in the deepest parts of the Spiteful Peaks, and it was Rakarth, Malekith's most accomplished beast tamer, who reported to him this incredible find. This news caused a strange pleasure in the Witch King, who started to weave a twisted plan to use these creatures against the High Elves of Ulthuan. The dozen eggs were taken to Naggarond and ritually attended by Khainite Witch Elves until they cracked open a hundred years later. The first one to break out, Seraphon, immediately turned against the other eggs, destroying several of them before it could be stopped. Impressed by its vicious character, and conscious that the firstborn of the litter would be the strongest, Malekith claimed his right to ride it.[6a]

The Black Dragons would take long to reach their maturity, but their training started at once, and Malekith put Beastlord Rakarth in charge, demanding the strictest level of training for Seraphon. To the rest of the future Dragon riders, handpicked from among his favourite generals, he ordered them to stay with their beasts while they were trained. All of them spent many decades training these monstrous creatures until the Dragons understood their masters, and the masters could control them. This provided Malekith with a full flock of highly trained Dragons ready to raze the coasts of Ulthuan and the Old World by surprise.[6a]

Beastmaster Rakarth once fought a particularly bitter battle against the traitorous High Elves of Ulthuan. He led an army in which he had amassed the largest force of War Hydras in Druchii history. With nine of the mighty beasts at his command, he predicted a swift victory. The wizards Liandus, Ellyunnor and Aliana, however, accompanied the enemy. Within minutes, their combined magical barrage had whittled the Hydras' number down to three; two of which broke and fled the field.[2a]

Rakarth vowed never to be defeated by High Magic again, and forged a pact with Morathi. She spun her spells over the surviving Hydra, known as Daerlythe, or "Burning Fury", to turn it into the first of the Spellthirster Hydras. Dark Magic mutated the creature tremendously. Daerlythe's skin began to glow with burning blue-black energy, and great rents opened in his flesh where Morathi had ritually carved dread runes. During his next appearance on the battlefield, it was found that he was physically weakened, but had also developed a strong resistance to magic, especially High Magic. A breeding program was soon established, and Daerlythe was retired from battle. To this day only one in every ten of his offspring shares his abilities.[2a]

"Mounted in a saddle lined with human skin, the duke and his men saw a warrior-lord clad from head to toe in jet-black armour worked into the most cruelly delicate forms by the hand of a master far superior to any mortal artificer. The dark elf lord’s tall helm covered his features, but none could miss the balefire light shining from the eyes like coals in the night. In one hand, the lord bore a long, coiling whip, which snaked and writhed as if possessed of some terrible inner vitality, while in his other hand he bore a shield adorned with the fell runes of forbidden magics."

—The Beastlord arrives to siege the city of Brionne.[4]

Rakarth goes to battle mounted on the back of his Black Dragon Bracchus, wearing the Beast Armour of Karond Kar and wielding an Enchanted Shield and the Whip of Agony.[1a][7] 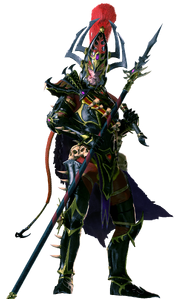 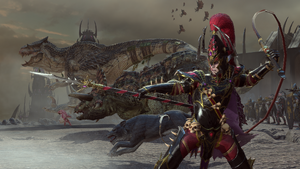 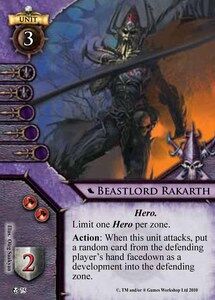 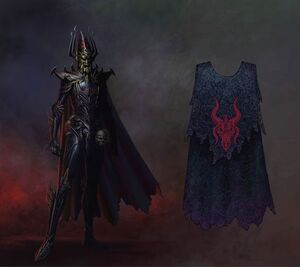 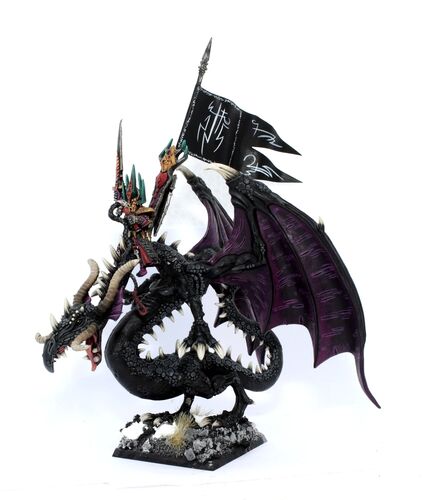