Pygmies are the smallest of all the Human races of the World. Some Old Worlder scholars deny that they are Human at all, whilst others refer to them as "Lesser Men" or "Black Halflings."

They come from the dense tropical jungles of the New World continent of Lustria where they live in small tribal groups.

Pygmies are short and squat, rarely more than five feet tall and often shorter. They are powerfully built and by no means puny. Their skin colour is dark and copperish, whilst their hair is always naturally black.[5]

"Giant Pygmies" supposedly exist in the fabled land of Lemuria, occasionally serving as mercenaries within the armies of the Ogre Kingdoms.[7a]

The Pygmies' chief skills are hunting and tracking rather than formal fighting, and their characteristic weapon is the blowpipe, with which they shoot poisoned darts. Their weapons and ornaments are made from bone, wood and stone, and the use of metals is altogether unknown, save from items traded with the Slann. Pygmies survive largely by hunting crocodiles, monkeys and lizards, using poisoned darts to immobilize their prey.

Pygmy culture is primitive, colourful and full of ritual. They often paint their bodies and are very keen on ornamental mutilation such as nose-bones, lip and ear plates, filed teeth, ritual scarring and tying great big weights to their tender bits.

Filed teeth and ritual scarring are considered very attractive (by other Pygmies). Pygmies decorate their huts with the shrunken heads of enemies and captives are often "invited for dinner."

Pygmies speak their own strange tongue, although the occasional chieftain might know enough Norse or Old Worlder to get by at a trading post.[5]

Witchdoctors are special tribal priests or shamans found amongst the Pygmies. They always follow one of the two major Pygmy deities, and have differing abilities according to which of their deities they support. They have some similarities to the Alchemists of the Old World in their reliance on herbs and preparations, and lower magical ability than Wizards of the same level.

When male twins are born in a Pygmy village a feast is held to celebrate the event and the two boys are ritually appointed Witchdoctors of the two gods, Beesbok and Brobat, with the fatter youth being assigned Beesbok. When they reach the age of fifteen they are given huts at opposite ends of the village; each then dedicates the remainder of his life to serving their god.

If there is already a pair of Witchdoctors, the twins act as apprentices until the death of one of the Witchdoctors. When female twins are born a feast is also held to celebrate the event, and the two girls are ritually appointed as special 'Guests of Honour'. They do not reach the age of fifteen.

Note that a village will either have no Witchdoctor, or two of them (one of each deity). However, each Witchdoctor pretends that the other does not exist. If asked, they will say that they are the only Witchdoctor in that village. They never speak to each other and avoid meeting at all times.

Although they have some spells, they normally only use these in self defence or while away from their home village, preferring to treat day-to-day problems with herbs, drugs and potions. Their actual approach varies according to which deity they follow: if a villager came to see them complaining of a rival in love, Beesbok's Witchdoctor might prescribe a love potion to be given to the object of affection, while Brobat's would probably offer a vial of poison to be given to the rival!

When one of the Witchdoctors dies, whether from natural or unnatural causes, the other leaves the village to take up a wandering lifestyle. He may be persuaded to join parties or adventurers for short periods.

The Witchdoctor of Beesbok is most popular with the villagers - they come to him because they assume that he will want to help. However, the Witcdoctor of Brobat is unpopular and generally shunned, but the villagers never openly oppose him and seek his advice because they are afraid of the retribution of Brobat. When a villager has a problem (illness, rival in love, flatulence, etc.) they will secretly consult both Witchdoctors and attempt to implement two sets of (usually extremely contradictory) advice.

Beesbok's symbol is a crude semicircle with its ends upwards (said to resemble a smiling mouth) while that of Brobat has the ends downwards. Many Pygmies carry this symbol on an item that can be quickly inverted, such as a shield, to that they can present the correct symbol if they should happen to meet either of the Witchdoctors.[4]

A Pygmy armed with a large blowpipe. 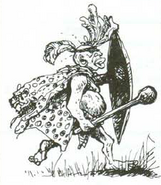 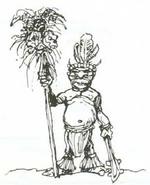 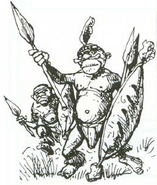 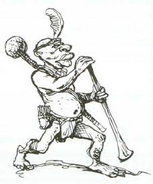 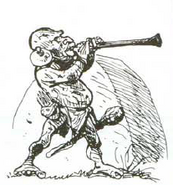 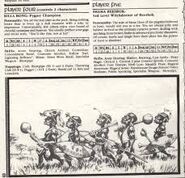