Order of the Gold Lion

The Knights of the Gold Lion are a Secular Order and are unusual in that they were founded in Araby during the Crusades.[1a]

A group of disenchanted Knights had fled to a backwater Arabyan village after their army had suffered a crushing defeat and began to despair of ever returning home. One Knight, Erich von Strommer, took it upon himself to restore their resolve and to prove the truth of their cause, he set out into the savannah to take the head of a man-eating lion. He claimed that should he succeed in this impossible task, it would be a sure sign of Sigmar's favour.[1a]

Days passed and return he did, near delirious, bearing the head of a massive lion. The Knights were filled with courage and renaming themselves in honour of the feat, forged out into the desert, and eventually met up with allies. Since then the Order of the Gold Lion has served the Empire as one of its most loyal Knightly Orders.[1a]

The Knights of the Gold Lion adorn their banners and shields with roaring lions, and the helmet and neck barding of their steeds are typically gilded to represent a lion's mane.[2a] 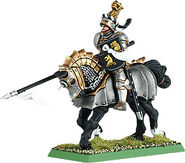 A Knight of the Gold Lion. 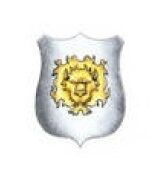 Emblem of the Order of the Gold Lion. 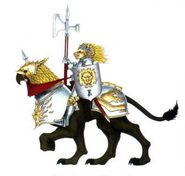 Knight of the Gold Lion mounted atop a Demigryph.