Warhammer Wiki
Register
Don't have an account?
Sign In
Advertisement
in: Cult of Morai-heg, Dark Elves, Kingdoms of Ulthuan,
and 3 more
English

View source
watch 02:52
Roblox: DeepWoken - The Loop
Do you like this video?
Play Sound

The Kingdom of Nagarythe, now known as the Shadowlands, is a dark and desolate region, but was once the greatest of the Elven kingdoms. Here, the first Phoenix King once held court, and it was here that the greatest battles against Daemonkind were won. That desperate struggle hardened and embittered the folk of Nagarythe, so that other Elves came to regard them as a cruel and bloodthirsty people. After Aenarion's death his son Malekith inherited the kingdom. When Malekith rose against the rightful Phoenix King, he led his warriors in a savage and destructive war. Nagarythe was destroyed and many of its people fled with their evil master to the cold lands of the New World.[1b]

They became the Druchii, the Dark Elves — evil kin to the Asur of Ulthuan, or High Elves. Today, what little remains of the once-proud Kingdom of Nagarythe is treated with fear and distrust. It is uninhabited but for wanderers and beasts. The great fortress of Anlec, from where both Aenarion and Malekith ruled the proud people of Nagarythe, was destroyed during the Sundering. Since that time, the Dark Elves have repeatedly attacked, attempting to reclaim their ancient kingdom, but each time they have been repelled by the High Elves. The ruins of Anlec have been refortified, fought over, and cast down again more than once, and even today they draw the Dark Elves back to the lands of their ancestors. Some whisper that more Elves have died fighting over Anlec's ruins than anywhere else in Ulthuan.[1b]

Aenarion founded Nagarythe as his own personal fiefdom after the death of his first wife Astarielle.[7a][3a] Ruling over the most hardened, driven and merciless warriors of his army, who became the Nagarythe, he established his court in the fortress of Anlec. Following his disappearance the realm of Nagarythe was inherited by his son Malekith. The outbreak of the Sundering led to a division of the Nagarythe people; while the majority fought for Malekith, a minority remained loyal to the Phoenix Throne and fought for Caledor I.[7]

At the end of the civil war, Malekith made a mad attempt to undo the Great Vortex. This led to a powerful magic backlash which quite literally ripped the land apart, leading to gigantic tsunamis which inundated and devastated large parts of Ulthuan, mainly the northwest and especially Nagarythe.[7] In -1599 IC, two Black Arks were beached to form the foundations of the fortress of Anlec - a structure that provided a base for the Dark Elves and would be destroyed and rebuilt. many times. In -922 IC, during the Scouring, a large Druchii army was destroyed at the Battle of Grey Canyon as the armies of Tethlis the Slayer continued to purge the Dark Elves from Ulthuan.[7c] Malekith would lead a desperate counter attack, culminating with the Siege of Tor Lehan where both sides would be wiped out, Anlec destoyed and the Altar of Khaine toppled into the Sea in -696 IC. Anlec would be rebuilt again in 1131 IC as the Dark Elves moved in subsequent years to besiege the Griffon Gate.[7c] The arrival of several tribes of Shades led to a vicious guerrilla war between the new arrivals and the local nomadic bands of Shadow Warriors.[3a]

In 2413 IC and after much heated debate, the court of Finubar dispatched Prince Melenar, a Warrior-Mage and head of House Coraith to begin a campaign to retake the Shadowlands. He would campaign for several years against the Dark Elves, establishing a stronghold and forming an alliance with the Shadow Warriors.[6b] Following the death of Melenar, his son Kaldor led an invasion of the Shadowlands on behalf of the Witch King, seeking to claim the lands and slay his younger brother.[6]

The war over possession of the ancient realm of Nagarythe, now a shattered series of isles, waves as strong now as it did five thousand years ago.[3a] In an attempt to wrest control of these lands from the Shadow Warriors of Ulthuan, the Witch King has moved several Shade clans to the Shadowlands to fight against the interlopers defiling the ground of Nagarythe.[3a]

Malekith has promised these Shade Clans possession of any Nagarythe lands that they can wrest from the High Elves, and rewards them for every head of a Shadow Warrior sent to him in Naggarond. There is now sporadic but vicious guerrilla fighting between the Shadow Warriors of Ulthuan and these émigré Shades -- sometimes called the Sundered Clans or Reaver Shades. Malekith hopes that this fighting will sap the strength and morale of the Shadow Warriors, so that they will be swept away when the time for full invasion comes again.[3a]

Nagarythe is a hard land of intemperate, climes and dark deeds. It was from here that Malekith the Accursed led his civil war, and this land too bore the brunt of that conflict. Nagarythe was all but destroyed in the Sundering, and by far the greater part of its lands lie drowned in the murky oceanic depths. Those of its folk that remain are a secretive and ruthless sort, little trusted elsewhere in Ulthuan for their kinship with the traitors of ages past. Ironically, these same blood-ties drive the dour warriors of Nagarythe to fight with a merciless determination. There is not a High Elf living that does not despise Malekith and his Dark Elves, but the folk of Nagarythe hate the Naggarothi with a ferocity that far surpasses the most fervent warriors of other lands. There can be no peace in Nagarythe, no cessation of bloody war, until Malekith and every one of his twisted followers have been scoured from all the lands of the world.[4a]

Nagarythe's population was scattered and became nomadic, wandering in the wilderness of northern Ulthuan. The warriors of this realm are known as Shadow Warriors. Organised in small bands, they specialise in seeking and ambushing Dark Elf raiders. They favour dark tinted armour and tunics and plumes decorated with dark colours, especially blues and sombre greys.[2a]

Shadow Warriors keep the meaning of their personal heraldry and lineage as closely guarded secrets, known only to the closest of their allies. Many bear crescent pendants of the goddess Lileath, the only being in creation who can forgive them for their ruthless actions.[4a]

Only on the inland borders of Nagarythe are there permanent settlements of any size, and it is from these that the realm's few archer and spear regiments are recruited. Their grim banners stand in stark contrast to the glorious heraldry of other kingdoms, the ravens of Morai-heg are in fact common symbols, the Elves of Nagarythe pray to the Crone Goddess for her aid in their eternal quest for vengeance.[4a]

It has long been a tradition for the Silver Helms of Nagarythe to adopt warrior names in place of those born from lineage and tradition. This custom dates back to the civil war; with the families of Nagarythe divided, and its courts riven by betrayal, many warriors found it necessary to be judged by their own deeds rather than those of their families. As such, most Silver Helms and nobles paint over their familial heraldry with raven blacks, midnight blues and blood reds, to hide the marks of their lineage.[4a] 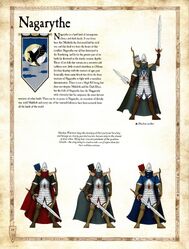 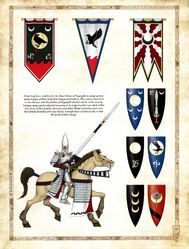 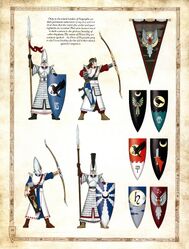 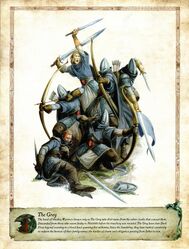 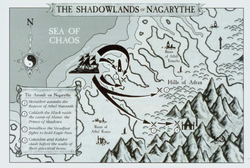