View source
watch 02:23
Wiki Targeted (Games)
Do you like this video?
Play Sound

"It is only by the grace of Sigmar that I live, but I am so very cold and so very hungry. After the attacks by the Chaos-filth in the pass above Scalvad I became seperated from the war party and have seen no living soul since. I can remember little of the battle in truth, but a savage blur of flashing axe-blade, steaming blood, and snow, snow as white as death. Day and night have become a grey twilight to me, and I could not say how long ago that was or how far I have staggered on, half-blind and hungry, and I write these few lines in my journey in a desperate attempt to keep my sanity. I cannot account for my continued survival, but my wounds have at least stopped bleeding and save for the cut in my stomach which is every hour more worrisome their pain had faded to a dim echo of what it was. If only I could be warm again, if only I could have something to eat. It is all I think of between dark waking dreams I do not dare to recall. It is strange, passing strange, for I cannot remember the enemy striking me there, the emptiness, imagining things so...hungry...cannot think...a fire in theval....so hungrrry..."

—Parchment scrap found in the ruins of a destroyed encampment in the Vorgo Crags. No bodies were found[1a]

Mournguls are monsters feared and whispered of above all other dangers that haunt the bleak and empty places of the Old World. They are a thing neither dead nor alive, possess an insatiable hunger and are malice personified. From the cold wastes of Norsca to the lofty heights of the Grey Mountains dreadful tales are told around huddled fires of those lost in the white killing cold of the mountain winter, driven mad by famine and pain, insane enough to devour their own companions and former friends for meat, and the warmth of their fast-flowing blood.[1a]

But for these damned souls there is no relent and no salvation, and even the horrors in which these monsters indulge cannot save them. When death overtakes some of them, such is their desperation and malice that it lingers on after death, and the most destructive and insidious winds of magic are drawn to coil around their spirits to taint and saturate them. Then their cadavers are warped and twisted into inhuman proportions, and they become something neither ghost nor revenant - a terrifying mockery of life, a monstrous, razor-thin shadow of cold, dead flesh and frostbite-cracked bone, with a gaping maw of needle-teeth and a cavernous stomach that hangs open like a dreadful wound.[1a]

Mournguls are condemned to an eternity of hunger and terrible isolation, doomed to haunt the high, chill barrens, preying on whatever and whomever they happen across, be they travellers, hunters or outcasts, where they enter the legends of Man, Orc and Beastman alike, and in every one are a horror to be fled from and avoided. It is only in the harshest of winters when the snows crash down the mountains and crushing cold grips the lowlands that the Mournguls can descend to feast upon the towns and villages, an all but unstoppable terror, but no matter how many they rend and devour, they can never know relief from the madness of the hunger within them, and only fire is any defence against their kind.[1a]

Such is the Mournguls' dark repute that both the noble knights of civilised lands and mighty Champions of Chaos alike seek them out to slay for glory, but few succeed, and many Necromancers who have sought to enslave them have endured their half-lives at the Mourngul's grasping claws. Only when the Winds of Magic surge and arcane storms scream across the world can powerful binding scrolls be fashioned to contain and control these nightmare creatures, and even then total control of them is never assured.[1a] 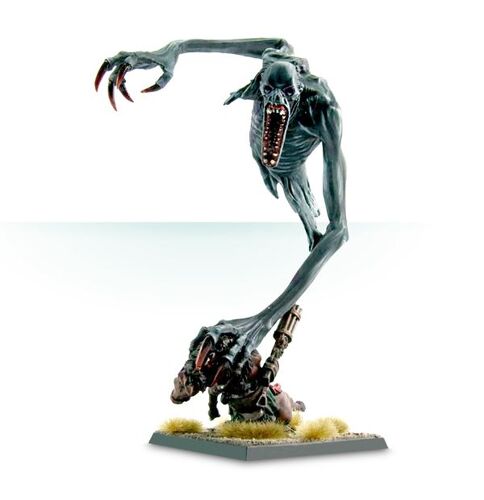