"Tree-cutter? Chayal would find your neck before you could pull that shiny toothpick from its sheath."

—Korhil's response to Tyrion, teasing each other in good humour before Finubar.[2a]

Korhil Lionmane, is the current Captain of the White Lions honour guard and the personal bodyguard and friend of the incumbent Phoenix King, Finubar the Seafarer. When Korhien Ironglaive—the previous Captain of the White Lions—met his death at the hands of the Dark Elf Assassin Urian Poisonblade, the bodyguard of the Phoenix King gathered to select a new leader from amongst their ranks. Their choice, approved and blessed by Finubar, was the warrior Korhil.[1a]

The White Lions claim Korhil to be the strongest Elf in all of Ulthuan, and certainly his strength and stature are legendary. Yet Korhil is no lumbering giant, for he wields his long axe with a dexterity and grace that makes even his fellow White Lions appear cumbersome. His honest demeanour and noble bearing have won him many friends amongst the Lords of Ulthuan, and the heroes of other races besides. Korhil has ever repaid his friendship with the same loyalty he offers his liege, and gladly marches to his allies' aid should the Phoenix King consent to sparing his services. Thus has Korhil's axe spilt blood in many lands, and in the cause of many people not his own.[1a]

Korhil was a famous warrior even before his rise to captain. Years before, it had been he who had hunted and slain the great lion Charandis. This was a particularly ferocious creature, mutated by the warping power of Chaos to an armour-hided brute that was mighty even by the standards of other white lions. Dozens of Chracian hunters had tried to bring Charandis down, but the beast had slain them all.[1a]

The young Korhil, however, was not to be deterred, and he headed into the Chracian highlands in search of his prey. Charandis' trail was not hard to follow, for it was marked with the bloody bodies of those who had attempted to end his rampage. When Korhil finally encountered Charandis, the lion was near-mad with bloodlust, and savage beyond belief. Yet Kurnous was with the young hunter that day. Soon realising his axe-blows had no effect on Charandis' magical hide, Korhil shifted tactics. In a feat of physical strength unheard of for an Elf, he wrestled the raging beast to the ground and throttled the life from its thrashing body.[1a]

Korhil's success earned him an instant invitation to join the Phoenix King's White Lion bodyguard. Only twice before had such an offer been made to so young a warrior, and Korhil was swift to accept. In the decades that followed, the young hunter grew into a grizzled White Lion veteran, proving his worth time and again against Dark Elf Assassins and the dread beasts of the Annulii. Thus has Korhil served Finubar the Seafarer with unfailing loyalty for many years, and has stood steadfastly beside him at many battles. Indeed Korhil's gemstone-set belt was a gift from Finubar following the Battle of Tor Achare, where Korhil hurled himself in the path of Morech the Black's Manticore. Korhil was badly mauled, but gave far better than he got, disembowelling the beast with a single swing of his axe before unconsciousness took him. When Korhien Ironglaive died during the Battle of Finuval Plain, Korhil succeeded him as Captain.[1a] 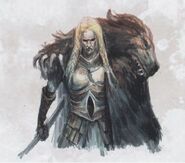 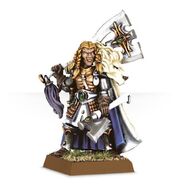 Retrieved from "https://warhammerfantasy.fandom.com/wiki/Korhil_Lionmane?oldid=130187"
Community content is available under CC-BY-SA unless otherwise noted.