Warhammer Wiki
Register
Don't have an account?
Sign In
Advertisement
in: Cult of Sigmar, Heldenhame Keep, K,
and 4 more
English

View source
watch 04:03
Wiki Targeted (Games)
Do you like this video?
Play Sound

The Knights of Sigmar's Blood are a Templar Order[3a] with a long and proud history. They are led by their Grand Master Hans Leitdorf, brother of the Elector Count of Averland.[1a]

The order's ranks are filled with the men of noble houses across the Empire. Their selection process is considered extreme even among the other Orders, as each Knight in training must spend a year in study within the church where they are judged by the priests as to their worthiness.[1a]

The Grandmaster of the order is Hans Leitdorf, brother of the late Marius Leitdorf. His second-in-command is Rudolph Weskar, a tyrannical and stubborn warrior. One quirk about the order is that they contain no Inner Circle knights. However, the unit known as the Brotherhood of Steel was considered the best in the order and generally looked up to.[4a]

The Knights of Sigmar's Blood's bear red shields emblazoned with the skull of Sigmar wreathed in laurel leaves. They also carry distinctive white lances with black flames to commemorate the Battle of Blackfire Pass that gave birth to the Empire.[2a]

During the End Times, the Order was attacked by Undead forces led by Mannfred von Carstein and Arkhan the Black, searching for Morhikhane, the Black Armour of Nagash at their stronghold of Heldenhame Keep. The Knights of Sigmar's Blood were almost totally obliterated in the battle and their second in command, Rudolph Weskar was killed by Mannfred von Carstein himself. The remaining knights died after becoming frustrated with their High Elf allies, led by Eltharion the Grim. They charged into a trap devised by Mannfred and Elise von Carstein, where Leitdorf duelled the former to the death.[4] 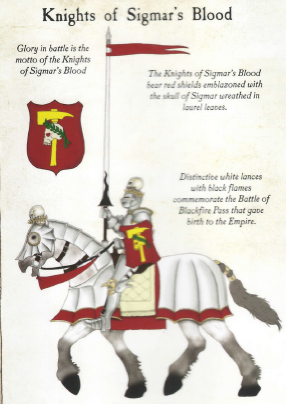