"Powerful was its stature, tall and curving were its horns, and filled with hatred and cunning were its eyes, glowing in the night. It lashed about with a barbed whip, the touch of which cut and tore. With a roar, it pointed, and a pack of nightmare dog-beasts turned their feral attention towards me. Alas, I wished to stand and fight, yet my cowardly steed ran, and I was carried away, borne unwillingly upon its back. Could this fell Beast have been the one behind the constant raids? I know not."


—Markus Renkler, noble son assigned as squire and pistolier to the house of Middenheim. Later discharged and sent home in disgrace for cowardice.

Khazrak the One-Eye is one of the most legendary Beastlords in recent history, a being of horrific reputation possessing a ruthless cunning far above that of his bestial kin. By the normal intellectual standards of Beastmen, Khazrak has a unique and adept ability to control and harness the unruly spirit of the herd and devise simple but effective battle plans in order to win his battles. He is so unlike the vast majority of his kind, with a patient and cunning mind at odds with the normal headstrong nature of his foul race.[1a]

Khazrak the One-Eye is an eternal threat upon the Human lands of the Drakwald Forest, his warband roaming the area, terrorising the townships and roads. No one is spared in his attacks, his superbly trained Warhounds chasing down the few who manage to escape the warherd before tearing them to bloody scraps of bone and flesh. He has plagued that cursed region for several years, descending without warning and then slipping away into the shadows once more. Never before has a Beastman leader proven so elusive to retribution that not even the Elector Count of Middenland could ever capture and subdue the rampaging beast. It is said that so long as Khazrak lives, the Drakwald will forever be plagued by strife and conflict.[1a]

After many ruthless raids against isolated groups of villages in the outskirts of the Drakwald Forest, the armies of Middenland and Middenheim had no choice but to finally put this beast down once and for all. On several occasions, the Elector Count Boris Todbringer of Middenheim led the hunt to catch Khazrak, and once even managed to trap the Beastman near the village of Elsterweld against impossible odds. Khazrak lost his eye to the Count's Runefang in the ensuing battle but still escaped the slaughter with a handful of his herds still intact.[1a]

It is said that Khazrak's eye has never truly healed, and to this day, it continually weeps blood and pus. Such a handicap would usually prove fatal in the brutal culture of the Beastmen but Khazrak's wound has actually made him all the more fearsome. For many months afterwards he plotted and schemed in his hidden lair, and only when the perfect opportunity presented itself did he put his plan into action.[1a]

With a series of daring ambushes, Khazrak lured the Toddbringer and his army into a cunning trap. Khazrak confronted the Elector Count and threw him from his horse, pinning him to the ground. With slow deliberation, Khazrak gouged out one of the Count's eyes with the tip of a horn. Khazrak allowed his foe to live, and some believe that he actually enjoys matching his wits against Todbringer, seeing it as a challenge to his skills.[1a]

Humiliated beyond imagination in the eyes of his fellow Counts and Council members, the Elector has posted a bounty of ten thousand gold crowns for Khazrak's head, an act that ensured the coming and going of many mercenary companies for the past few months, but those few mercenary armies who have returned from the Drakwald have done so empty-handed, and often horribly mauled. The two rivals have clashed on several occasions since.[1a]

Khazrak remains a dire threat to the entire north of the Empire. His invasions are covering a wider area with each passing year, as more and more towns, forts and castles fall victim to his well-planned and devastating attacks.[1a]

The deed that saw Khazrak rise to power is known to the Men of the region as the Battle of Grimminhagen, but to others it is known far more as the Slaughter of Grimminhagen. The armies of Middenheim had been persecuting the warherds of the northern Drakwald for several seasons, and a number of Chieftains had attempted to unite the brayherds in order to attack back. Yet Middenheim dwells aloft upon the Ulricsberg plateau, one of the most defensible cities within the Empire of Man. Thousands of Beastmen lost their lives in futile attacks against it. Khazrak bided his time, seeing that these Men would be defeated not through brute force alone, but through animalistic cunning.[1b]

And so Khazrak launched a series of attacks against the less fortified towns of the Drakwald, burning them to the ground, slaughtering thousands of the Emperor's subjects and turning many more into refugees. Khazrak's herds committed such atrocities that the Empire had no choice but to seek dire retribution. It was only a matter of weeks before Khazrak's plan came into fruition. Khazrak gathered a brayherd of ten-thousand Beastmen and attacked the fortress of Sternhauser Keep. Yet he ordered his horde to withdraw as soon as he received word from his scouts that Men were coming to relieve the keep's defenders.[1b]

Khazrak split his horde into two armies. He led the first one north, through the dark forest to a place near the road along which the army of Mankind would be hemmed in by rocky, overgrown crags. The second Beastmen horde was sent to a place several leagues south, where the road crossed a ford over a wide forest river. Even as his army mustered on the reverse of the hill overlooking the road, Khazrak saw the mighty Human army of Middenheim approaching in a column, led by a phalanx of mighty armoured Knights. The Beastlord saw the enemy army was many thousands strong.[1b]

Khazrak felt instantly the bestial desire for his Gors to be up and charging with animalistic wrath. Yet Khazrak cast his eye back at his army, exerting his control over the herds with a low, animal growl. A hundred Knights passed below, and regiment upon regiment of foot soldiers followed. Still, Khazrak enforced his will and his army waited, straining at their leash but obedient. And then, as the last regiment passed by on the road below, Khazrak heard a great braying war cry from further down the road. He knew that the vanguard of the army of Mankind had reached the other half of his horde.[1b]

The Gors had succumbed to their bestial nature, just as Khazrak knew they would. Bellowing his own warcry, Khazrak leapt down from the rocks onto the road below, lading mere yards behind the column's rearguard regiments. An instant later, his army landed behind him with the thunderous noise of several thousand pairs of hooves slamming into the ground. Within moments the Beastmen were charging the startled Men, cutting into the disorganised regiment with savage abandonment.[1b]

The battle that followed saw the Grand Army of Middenheim utterly defeated. The hundred yards or so of open land cut back on either side of the road became a blood-soaked killing ground. The Knights had scant time or even room to bring a charge to bear. Darting Ungors cut their horses from under them before the mighty two-handed axes of the Bestigors hacked into the flailing Knights. Khazrak's horde drove through the Human's rearguard, cutting men down with frenzied barbarity.[1b]

So complete was the slaughter that the two hordes of Beastmen came face to face and so hot was their blood that they fell upon each other. It is said that only Khazrak's animal dominance and the threat of his vicious whip Scourge, stayed the hands of the Beastmen and averted kin-slaying. From then on, Khazrak became a figure of awe for the Beastmen and a figure of dread for all Mankind.[1b] 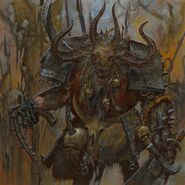 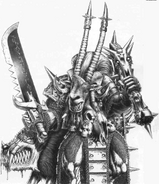