Not to be confused with Tzarina Kattarin the Bloody.

Tzarina Katarin Bokha, the Ice Queen of Kislev, is the current ruler of the Kingdom of Kislev and is known as one of the most powerful Ice Witches to have ever lived. From the icy fastness of her capital city of Kislev, the Ice Queen Katarin rules her land with an aloof majesty. The daughter of the fiery and charismatic Tzar Boris Bokha, she ascended to the throne in 2517 IC. She is the latest in a long line of Tzarinas descended from the ancient Khan-queens of the Gospodars, the powerful tribal group that migrated west centuries ago, and became the dominant peoples of what was to grow into the great nation that is Kislev.[1a]

A great wizard in her own right, her power is said to come from the land of Kislev itself, its icy soul and bleak tundra giving her command of the elements and mastery of that form of wizardry known as Ice Magic. Indeed, some whisper that she is in fact the living reincarnation of the very first Khan-queen, Miska, so complete is her grasp of this dangerous branch of magic. Upon her ascension to the throne of Kislev, it is said that the Bokha Palaces have grown a new wing, half a mile long, made entirely from glittering ice. This wondrous creation would be beyond all but the most powerful Ice Mages, and it is here that Katarin remains for most of the time, granting audiences in an immense chamber of magically woven hoarfrost. Some believe that she simply prefers the chill of these frozen corridors, while others say that it is a display of her power to overawe would-be enemies and foreign ambassadors.[1a]

Katarin was born as the only child of Boris Bokha, the Tzar of Kislev during the turmoils after the Great War Against Chaos. When Tzar Boris undertook the initiation rights to become a High Priest of the Cult of Ursun, he disappeared into the wilderness and haven't been seen since for nearly eighteen days. When it would appear that Boris was presumed dead, the nobility of Kislev were moved to crown the still infant Katarin as the new Tzar of Kislev until Boris was later found unconscious yet alive alongside a mighty Bear.[2b]

With the weight of rulership thrown off her shoulders, the future Tzarina grew to become a powerful Ice Witch, some saying she is the reincarnation of Khan-Queen Miska, the first ruler of the Gospodar and the greatest of the Ice Witches. Tzarina Katarin was crowned in the imperial year of 2517 IC, when Boris met his end in battle whilst leading a pulk north of the Lynsk into Troll Country. At an unnamed river crossing, the Tzar charged deep into the Kurgan army of Hetzar Feydaj but was soon surrounded and cut off from the rest of his army. He and his bear Urskin fought with all the might and fury of the Bear God, but even Red Boris could not triumph against such odds. Urskin was able to fight his way clear of the Kurgans and carry the Tzar back to the rest of the army, but it was already too late; the Tzar had taken a score of wounds, each enough to be mortal.[2b][2c]

Only when the battle was won did the Tzar slide from the back of Urskin and die. His faithful mount roared in mourning for a full night before vanishing into the bleak northlands, and legend has it that to this day Urskin continues to hunt down the creatures of Chaos that slew his master. With the death of Tzar Boris, the now fully grown Katarin became the Tzarina of Kislev, the latest in a long line of rulers descended from the ancient Khan-Queens of the Gospodars. She rules with a cold majesty, beloved by her subjects and feared by her enemies.[2c]

"The strength of Kislev lies in you all. The land has called you all here, and it is here that you will put that strength to the test defying Chaos. There is power in this land, and tomorrow it will run in all your veins. Use it well."

Where Tzar Bokha was a man who preferred to lead from the front and was renowned for his courage and leadership, the Tzarina, in keeping with her icy powers, is aloof and remote, preferring to work through agents and generals. Only under the direst circumstances does the Tzarina join her armies (known in Kislev as punts), but when she does it is often upon a mighty steed whose flanks shimmer with glittering ice crystals and whose breath is the winter wind, or riding an armoured sled, drawn by a team of identical beasts. On those rare occasions when she leads her army in battle, the devotion lavished upon her is beyond that which might be expected of such a remote and cool ruler. Her power over the elements is clear proof that the blood of the Khan-queens flows in her veins. The Ungols of the north fear and respect her as one of the ancient warrior witches from their oldest myths.[1a][1b]

A time is coming that will see the Tzarina on many a battlefield before the year is out. Marauding tribes of Kurgans and Kyazak push south in ever-increasing numbers, united behind the banners of their Zars and Hetzars. The sheer scale and ferocity of these raids has prompted the despatch of a number of contingents from the Empire to aid Kislev — artillery from Nuln, mercenary companies from Tilea, Wissenland Pike, arquebusiers from Averland, Nordland halberdiers, knightly orders and all manner of troops from all across the lands.[1b]

The writings of Anspracht of Nuln names this time as the ‘Spring Driving’, an innocuous term that encompasses a time of unremitting horror and bloodshed. Masses of northern marauders are sweeping down into Kislev, butchering everything in their path. Many battles have already been fought and the Kurgans have razed several towns and stanitsas: Choika, Zhedevka and others that appear on no maps. The pulks have scattered into the oblast, though many Boyars are rallying their forces to fight once more, but as more and more marauders drive south, it is certain that the days of blood are not yet over.[1b]

Katarin the Ice Queen is likely based on the Snow Queen from the Danish fairytale of the same name by author Hans Christian Andersen. The Snow Queen has long been a common fantasy archetype, inspiring characters such as the White Witch from the Narnia novels, and Elsa from the Frozen series.

Katarin's name is based on Russian Empress Yekaterina Velikaya (Екатерина Великая), known in the West as Catherine the Great. 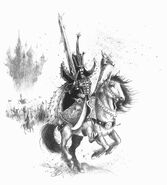 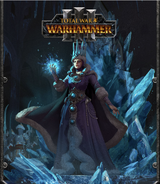