watch 03:19
Wiki Targeted (Games)
Do you like this video?
Play Sound

"Reiksguard Knights, your Emperor is calling! Death or glory await us, but if we die, we will die as warriors, with swords in hand, and there can be no better death than that."

Grand Order of the Reiksguard

White and Red, The Emperor sigil

The Grand Order of the Reiksguard Knights, formerly known as the Reiklanderguard[6], are a secular order of knights created and sworn to the protection of the Reikland Imperial bloodline. The Reiksguard Order comprises an elite core of well-trained and well-equipped troops loyal to the Emperor who fight on his behalf. Being the best troops available to him, Reiksguard knights form the bulk of the Imperial household guard with duties in the battlefield as well as in social and political affairs. It is not uncommon for the Emperor, however, to attach a unit of Reiksguard knights to the armies of other Elector Counts, if the situation requires their considerable martial prowess. In doing so, the Emperor is essentially lending the Elector Count his personal support - or he could just be making sure that any unstable Elector Counts that could threaten the Empire's stability are closely monitored.[1a][2a]

This relatively young Order was first founded during the reign of Count Wilhelm III, who established the Reikland lineage of Emperors. The first of the Reiksguard knights swore the greatest of oaths - to give their lives in defence of the Emperor from any and all dangers as they believe him to be the living incarnation of Sigmar himself. Over the decades, Reiksguard knights have forged a legendary reputation on the battlefield; they often charged into the fray against opponents that would see other warriors flee in terror. Time again, their unmatched bravery has brought the Empire great yet bloody victories, such that their very name "Reiksguard" has become synonymous with feats of selfless heroism throughout the Empire.[1a]

"Every man here is loyal to the Holswig-Schliestein family, my prince. We'd follow you to the Realm of Chaos."

The ranks of the Reiksguard are open to all men of noble birth,[Note 1] regardless of what city or state they originally hail from,[1a][2a] although a disproportionate number of recruits hail from Reikland and Altdorf.[3] Provided they can prove their loyalty to the Emperor, and their feats of martial prowess meet the stern expectations of the Reiksmarshal, any warrior can hope to join this illustrious brotherhood if they so chooses. This is considered a great military and social honour amongst the nobility of the Empire, and there is no shortage of applicants that are eager to seek both fame and glory for him and his household. The Reiksguard can therefore maintain the highest standards amongst the many Knightly Orders and includes the very best warriors from all the Empire's provinces. The ranks of the Reiksguard include the heirs to many of the wealthiest and most powerful noble houses in the Empire, including the sons of several Elector Counts.[1a][2b]

The training retinue for new Reiksguard knights is an arduous process that takes many months.[2b] During their training, the novices are trained and tested in three disciplines: strength of mind, strength of body, and strength of spirit. Following this period of training, the novices take part in a vigil. The night before the vigil is spent praying and being prayed over– a ritual that is reputed to be an exorcism in case any demons are hiding in the novices. The actual vigil begins at dusk the next night. There, the novices are first questioned by brothers of the Reiksguard. They spend the remainder of the night praying. At dawn, they are ceremonially inducted into the Reiksguard in front of all the other brothers present at the Chapter House. At this time, the novices also take their oath.[3]

The novice's training culminates in the glamorous, if deadly, Emperor’s Tournament. This event occurs every year in Altdorf during the spring festivals, where a newly knighted member is given a mission by the Reiksmarshal to accomplish as his first line of duty into the brotherhood. This could be a political task or attachment to a formation that marches to war under the command of an Elector Count.[2b] However, the most common assignment for a newly-minted knight is to guard the Imperial Palace. This is because this job actually consists less of fighting, and more of telling nobles that they cannot see the Emperor.[3]

Although it's not technically part of the initiation process, a Reiksguard knight's first monthly inspection is also considered a milestone on their journey from novice to fully-fledged knight. New knights are given special attention at inspections.[3]

Although few in number, the knights of the Reiksguard are the most important part of the Emperor's army, for they are a symbol of the Empire's nobility and martial might made manifest. As such, when a unit of Reiksguard Knights takes to battle, it will typically form up proudly in the centre of the Empire battle line, the better to inspire the common soldiery and reassure them that the blessings of the Emperor is with them. Imperial history is rich with records of decisive battles won by a timely charge of the Reiksguard, and the halls of their barracks are hung with countless trophies and enemy banners won on the field of war. Despite the potential power and influence that such a reputation offers, the Reiksguard have always put loyalty towards the Emperor first and foremost amongst their duties.[1a]

In times of war, they take to the field alongside their Emperor, forming an elite unit at the core of the Imperial armies. They are also responsible for the security of all palaces and castles belonging to the Imperial family, including their main headquarter at Castle Reikguard. Individual squadrons of Reiksguard Knights are commanded by a noblemen, and are generally recruited from the same home province. This has lead however, to a great rivalry between the cavalry squadrons of various nobles, a circumstance that stems from the great diversity of people that forms the bulk of the Reiksguard. Being a highly celebrated and often loved Order of Knights, when a dashing young Reiksguard Knight returns to his home town on leave from his duties, he is often greeted by a crowd of cheering citizens, and riotous celebrations carry on long into the night for the amount of honour his presence brings to the otherwise unknown village.

When they accompany the Emperor on his many ceremonial demonstrations, they might often add to the splendour and magnificence of the occasion by further polishing and painting their otherwise already fabulous and expensive armour. During the annual Imperial tournament however, individual Reiksguard Knights would compete against each other for the honour of being closest to the Emperor, a position that is highly sought after by the more glory-hungry members of the Order. These events are a major highlight of the year, often attracting citizens from all over the Empire and beyond into the city, creating a large influx of revenue that helps provide the funds for their Knighthood.

Knights of the Reiksguard are subject to monthly inspections to make sure that each squadron is fully manned, and their arms and armor are in good condition. These inspections are typically performed by the Reiksmarshal, or occasionally the Emperor himself.[3]

As befits to their prestigious role and elite status, the knights of the Reiksguard are equipped with the very finest weapons and suits of armour available to them by the expenses of the Emperor and the Provincial Army. They ride massive warhorses to battle and adorned suits of gleaming dwarf forged Full Plate Armour in which are emblazoned with symbols of allegiance to the Emperor and his noble family. Due to their duties to the Emperor, the Reiksguard Order is mostly barracked in the comparative comfort of Altdorf, but they also maintain battle-ready fortresses scattered throughout the whole of the Empire, the most prominent of which is Castle Reiksguard.[1a][2a]

The Reiksguard colours are red and white, and their heraldry includes traditional symbols of the Imperial office – the crowned skull, laurel leaves, and the Imperial Cross.[2a]

The Order of the Reiksguard is divided into large groups of knights called Banners. Each banner is led by a Preceptor, also known as a Reikscaptain. Banners are divided into Squadrons. Each squadron has a standard bearer.[1][3]

Members of the Reiksguard who are no longer able to fight may become Sergeants. The duties of the sergeants include staffing the Chapter House and serving as trainers for the order’s novices. They also accompany the knights on campaign, cooking for them, standing sentry at night, and caring for the wounded.[3]

The Reiksguard is led currently by Kurt Helborg, the order’s eighth Grand Master. The Reiksguard Inner Circle serve as his personal champions and bodyguards.[3][5]

Though known mostly for their expertise in cavalry warfare, the Reiksguard are normally divided into a mounted arm known as the Reiksguard Knights, or the Imperial Cavalry, and an infantry arm called the Reiksguard Swordsmen, or the Imperial Foot. Although the infantry arm does not have the glamorous image of their cavalry counterparts, they are nonetheless a crack and flexible fighting force. They are based near the Emperor's palace and can be seen parading through the streets, escorting the Emperor on state occasions, and patrolling the city walls when the Emperor is on leave. The Reiksguard foot regiments are normally protected by both shields and heavily-armoured suits of full plate, adorned with a dazzling array of plumes and ribbons and kept polished to a mirror-like finish. They are armed with heavy swords, halberds or great two-handed swords that they fight in conjunction with other Imperial regiments, providing a flexible and battle-hardened support unit that provides exceptional aid in offence and defence. 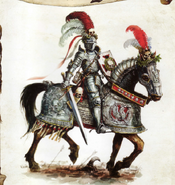 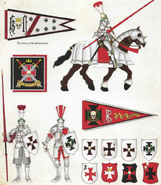 Retrieved from "https://warhammerfantasy.fandom.com/wiki/Grand_Order_of_the_Reiksguard?oldid=141802"
Community content is available under CC-BY-SA unless otherwise noted.