View source
watch 02:17
New Pokemon Games - The Loop
Do you like this video?
Play Sound

"In this year of Ulric's Grace, there were great sigils and portents of doom and destruction. The statue of the Wolf was heard to howl for death, and there were many children born with twisted feet or hands or other such Mutations. Great beasts were seen to fly through the air and block out the sun and a Famine and Plague did grip the coastal villages. Even as these Ails did pass, reavers emerged from the seas with sails of Blood and Death and laid waste to a temple and three towns upon our coast, killing or enslaving those who did not flee and plundering what little they could. They wore strange armour and fought beneath the banner of the wolf, as if mocking our Faith."

—The Chronicle of Middenland, depicting the bloodthirsty ravages of the Chaos-worshipping Norsemen.

Chaos Marauders are the most numerous tribal warriors dedicated to the worship of Chaos, and whose profession for violence and savagery have since earned them the well-known title of Marauders by the inhabitants of the Old World, though amongst their own people, they are simply known as Warriors, and in times of peace, they often serve the clans as guardians and hunters.

As befit their barbaric reputation, these axe-wielding barbarians often charge into the fray within great howling mobs without care for armour or tactics. They have little fear of dying in combat, for to fight and die under the gaze of their gods is considered the greatest death one can achieve in their lifetime.[1a]

The vast majority of these tribal Marauders are usually members of the bloodthirsty Norse that have come south for either the need for plunder or to attract the favour of the Gods. As such, each warband is usually led by a powerful and highly-independent tribal Chieftain, brutal warriors whose bodies are covered with the scars and trophies of many battlefields. Chaos Marauders are a hardy and adventurous lot that often roam the Northlands in search of glory, plunder or adventure. The other main groups of Northmen, the Kurgan and Hung, are generally horsemen and mounted archers.[1a]

In comparison to the soft-bellied men of the south, the Norse have endured a great many hardships. These warriors have braved harsh blizzards with nothing but scraps of flea-infested fur, hunted and eaten many deadly creatures with nothing but their bare hands and teeth, and whose adventurous nature has led them to many dangerous yet amazing places that no civilised Man would ever dare to venture. In battle, Chaos Marauders are experienced and natural fighters, born into hardship and brought up in a world where surviving each day is no small victory. Only the strong and capable prosper, for the weak are always weeded out and killed, either by the elements or by the blade of the northmen. They have no time for plough or sickle, for their tools are the axe, the sword and the shield. What their own lands cannot provide, they simply take from the lands of lesser men.[1a]

Aside from the standard hordes of Marauder warriors, the tribes of the North are capable of fielding a wide variety of grizzled troops. 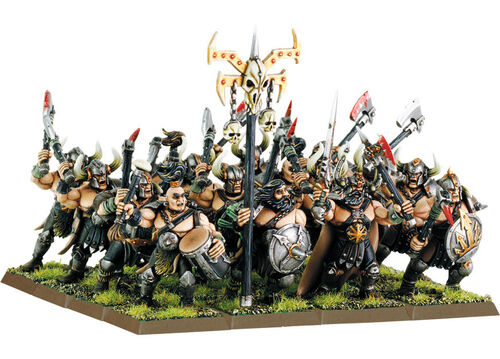