Caradryan of the Flame is the current Captain of the Phoenix Guard, and rider of the Frostheart Phoenix Ashtari.[1a]

Caradryan was an arrogant lordling in his youth. Handsome, rich, powerful and conceited, he was the very archetype of the jaded High Elf aristocrat. There was no rumour he would not foster, no intrigue to which he would not stoop. By all accounts, his petty nature was such that even his family would have long ago cast him out, were it not for the fact that such an act would have been a break with all tradition.[1a]

Caradryan's life changed when he made a pilgrimage to the Shrine of Asuryan, a journey which all High Elf Nobles are expected to undertake at least once. There, in perhaps the worst display of arrogance in his life, Caradryan stole into the holy Chamber of Days. What he witnessed there, no-one knows, but when he emerged he was a changed man. On his forehead was the glowing rune of Asuryan, marking him as the servant of the Creator God. On that day, Caradryan gave up all his worldly possessions and took the vow of the Phoenix Guard. He has not uttered a word ever since.[1a]

Caradryan spends long days in secluded meditation, reading the fiery letters that tell of the past, the present and the future. At other times, he stands atop the walls of the Shrine, his keen gaze scouring the lands of Ulthuan. Indeed, it is said that nothing is so small as to evade Caradryan's gaze, and no sound small enough to escape his hearing. Some have accused him of harnessing the prophecies of Asuryan to influence the future -- a transgression against the Creator God ranked amongst the highest of blasphemies. However, the truth of the matter is that Caradryan simply notices things that others do not, and has no prattling tongue to distract him from matters of greater import.[1a]

Over his long years of study and contemplation, Caradryan has become ever closer to the thoughts of Asuryan, until finally the hand of the Creator marked him as the Captain of the Phoenix Guard. Now he leads the devoted guardians of Asuryan during times of peace and war. There is divine strength in his hand, and the wisdom of Asuryan sits upon his noble brow.[1a]

Caradryan normally fights at the head of the Phoenix Guard, as befits his rank, but sometimes conducts the battle from the back of Ashtari, oldest and wisest of the Phoenixes of the Flamespyre. Theirs is a bond that goes back centuries, to Caradryan's earliest days of service. At the Battle of Finuval Plain, Ashtari picked an unequal fight with the Black Dragon Korzarandar, and it was only Caradryan's intervention that rescued the Phoenix from a grisly fate. Since those days, both Ashtari's flames and impetuousness have faded to naught, but his loyalty to Caradryan burns as brightly as ever.[1a] 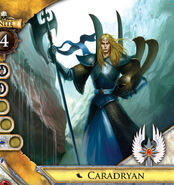 Caradryan's Warhammer: Invasion card
Add a photo to this gallery 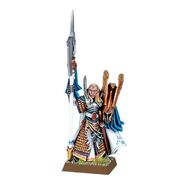 Caradryan Miniature (6th Edition)
Add a photo to this gallery

Retrieved from "https://warhammerfantasy.fandom.com/wiki/Caradryan?oldid=130583"
Community content is available under CC-BY-SA unless otherwise noted.