"Lock your doors, bar your windows and hide your goats - the Bearmen are coming! If you have a horse then flee, but don't try and run. They can smell your fear and they'll hunt you down like dogs. Ever seen what an angry bear does to a dog?"

Beorg Bearstruck, known also as Beorg, Son of Bran, is a mighty Champion of Chaos and chieftain of the Ursfjordings, also known as the Tribe of the Bear, or the Bearmen of Urslo by those they kill.[1a]

"The Dark Gods Bless Us"

In Ursfjord in the frozen north the great hall of Urslo is to be found. It is built of great timbers hewn from mighty trees. In this hall resides Beorg, chieftain of the Bearmen of Urslo, when he is not raiding or fighting.[1a]

When Beorg, son of Bran, cracked the skulls of Uldsdau and Graill, twin sons of Huern, chieftain of the tribe of the Wolf, the gods chose to show their considerable favour. As Beorg threw himself upon his enemies his back arched and split, his ribs cracked and turned in upon his body, and his face was consumed from within by a snarling black muzzle. The gift of the Were was upon him, the gift of the Dark Gods to the people of Norsca. He was Bearstruck.[1a]

Beorg is a were-bear of extraordinary power. When he enters battle he turns into a savage bear of immense size. This is a great and marvellous thing even amongst the tribes of the north, many of whose people spontaneously develop were-shapes in battle. Amongst Beorg's folk, the tribe of the Bear, it is common for warriors to sprout claws, snarling teeth, mane-like fur, and bear-shaped muzzles. But alone of all his people, Beorg carries the full shape of the Bear within him. Only he is Bearstruck - the mark of lordship amongst his people. Beorg was soon acknowledged as the chieftain of his tribe, the Ursfjordings or Bearmen.[1a]

When the armies of Archaon marched upon the lands of the Empire Beorg gladly joined them. His warriors had grown tired of easy conquests amongst the northern tribes, and like all the savages of the northlands, he despised the weakness of lesser men and cared nothing for the so-called civilised lands that lay to the south. At the Battle of the Monoliths, Beorg led his warriors against the army of Arch-Lector Mannfeld of Nuln. The soldiers of the Empire were horrified to find themselves confronted by men in half-bear shape, snarling and tearing like the savages they were. Amongst them all was the towering shape of Beorg - casting aside his foes with great swipes of his claws, knocking heads from shoulders and tearing arms from their sockets.[1a]

After the battle, Beorg realised that the lands of the south offered plenty of opportunity for bloodletting and savagery. His warriors fought their way through the Empire, occasionally finding employment, but more often living by pillage and robbery. Eventually, the Bearmen crossed the mountains and found themselves in the Border Princes. This was a time of great battles and much plundering, and Beorg's fame grew rapidly. At night, the Bearmen would sit around their camp drinking as only the northmen can, and singing rousing songs of their great adventures.[1a]

It was during one such session of drunken revelry that the Bearmen were ambushed by Goblin bandits. Many were shot with black arrows before Beorg strode forward to snap the Goblin chief's neck like a twig. During this battle, Oerl the Young was struck by an arrow which took out an eye and left a scar running across his face. Despite his injuries, Oerl held onto the tribe's banner, the Bear of Urslo, the skin of an immense bear slain by Bran to celebrate the birth of his son Beorg. Beorg rewarded the young warrior with gold and the honoured place in battle - by his side.[1a]

Beorg Bearstruck descends directly from The Great Bear, a mysterious figure which gave origin to over 15 generations of Bear-stricken and could be an ancestor of Kislevite Tzar Boris Ursa.[1a]

From these Bear-stricken come the Bear clans of Ursfjord, including the Oerls, of which the banner bearer Oerl the Young is the latest heir, and the line of Bruno Ursson, the Black Bear of Urslo.[1a]

Bruno appears to be Beorg's grandfather or direct ancestor, through Bran Bearheart, his father. From Bran's marriage with 'Bear' Brunhild came two children, Beorg and Tyeddi Bearsson. The latter ran off to study poetry in Nuln and is considered the black sheep of the family.[1a]

The Bearmen of Urslo fight in a unit of at least 10 warriors, including Beorg (the chieftain), Oerl the Young (the banner bearer) and a hornblower.[2a]

The Bearmen, like many of the tribes of Norsca, are affected by the dark power of Chaos. This has made them as much beasts as men and all are touched with the mark of the were-bear to some extent, with shaggy hair, brutal ursine faces, massive teeth, and slashing claws. They wear barbaric clothing made of furs and held together with leather straps, and they have wild, unkempt hair. Their iron helmets have horns which make them look especially ferocious, and over their light chainmail armours, many wear long shaggy cloaks made from wild bears - often with the head or claws left on. All of them carry axes and shields.[1a]

They can be hired as mercenaries by anyone except for High Elves[1a], Bretonnians, Wood Elves or Lizardmen.[2a]

Beorg is a were-bear, so he fights with his claws and teeth. About his neck, he wears the Bear Fang Talisman, a gigantic and ancient yellowed canine tooth that acts as a sacred talisman of lordship amongst Beorg's tribe, and that wards off blows that would otherwise harm its wearer.[1a][2a]

Next to him, Oerl the Young carries the tribe's totem into battle - the Bear Banner, an entire bearskin whose grizzly head leers out from the top. The skin's power is immense, driving the warriors into a fury that is almost impossible to stop.[1a][2a] 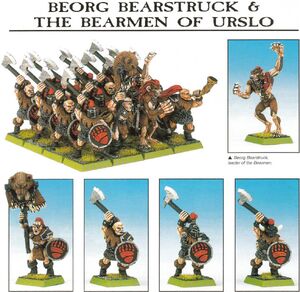 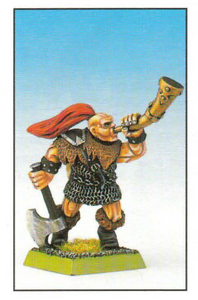 Musician (5th Edition).
Add a photo to this gallery

Retrieved from "https://warhammerfantasy.fandom.com/wiki/Beorg_Bearstruck?oldid=132108"
Community content is available under CC-BY-SA unless otherwise noted.