End of the Vampire Wars
Annexation of Sylvania by Stirland
The Battle of Hel Fenn was the final climactic battle of the Vampire Wars. Mannfred von Carstein was defeated by a coalition of Imperial and Dwarfen troops led by Count Martin of Stirland. 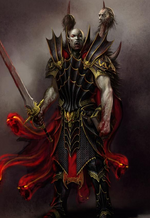 Mannfred von Carstein was the final Vampire Count of Sylvania. In the campaign leading up to Hel Fenn, known as the Winter War, he had laid siege to the cities of Altdorf and Marienburg, but was repulsed in both locations. A game of cat and mouse ensued.[1b][2a] Initially, Mannfred fled north to Ostermark. At the Battle of Horstenbad, nearly half of his army was destroyed as it shambled down a forest road. However, less than a month later, Mannfred seized the town of Felph and resurrected its inhabitants as zombies. A besieging Imperial army was repulsed by Mannfred's magics. He was then forced into Sylvania. However, at Bylorhof he raised a massive army of zombies and defeated the joint Stirland-Averland force sent to defeat him.[2a] Many battles were fought, but neither side could gain the upper hand in the war. Eventually, Mannfred was forced back into Sylvania a second time. Hiding in the woods, it took the Imperial forces many days of scouring Sylvania's dense woodlands and desolate moors to locate Mannfred. They did not expect that he would be able to muster a large army. Eventually, he was discovered near Hel Fenn[1b]. Having spent some time there reanimating those who drowned in the swamps[2a], the amount of undead Mannfred had been able to summon was astounding. Word was sent to Stirland's allies, and the forces prepared for battle.[1b]

In the lead up to the battle, Mannfred was able to lure the Empire army across the swamps.[2a] Here, unseen hands reached from the waters and drowned up to a quarter of the infantry.[2b]

"We rode into the open plain at Hel Fenn and our eyes were drawn across the plain. Fog drifted through the twisted trees before us, moving sluggishly on the breeze that came from the stinking swamp."

Located past the eastern end of the swamp [2a], the battlefield at Hel Fenn consisted of an open plain, sloping up to a ridge in the middle, and surrounded by forests.[1b] The human armies deployed on the ridge, which was nicknamed Thunder Ridge by the artillery crews positioned there. At the bottom of the ridge was a road raised up from the rest of the ground. On the Empire's left flank was a fortified farm, and on their right was an abandoned fort.[1c]

The Empire army's position was well defensible. Count Martin only needed a way to make sure that Mannfred was forced to attack him, rather than the other way around. Therefore, he set up the following ploy: The majority of his army was deployed directly behind the ridge, out of sight from Mannfred. A thin battle line of Free Company Militia and Empire Huntsmen was formed in front of them. He hoped to use this tactic as a means of drawing Mannfred's army towards him. Meanwhile, knowing that Mannfred would attempt to encircle his numerically inferior human army, Martin placed his strongest units, including the Ostland Black Guard in the abandoned fortress and fortified farm on the flanks of his battleline.[1d][1e]

Mannfred von Carstein knew that the Empire's army was smaller than his, and their Dwarf allies were still some distance away. Therefore he planned to attack quickly and separate the two forces, each one being easier to defeat on its own.[1d]

At dawn, regiments began forming up. It was clear the battle was to occur that day.[1d]

Mannfred's first move was to attempt to take the abandoned fort held by a contingent of Ostland Black Guard and handgunners. Shortly afterward, similar skirmishes broke out on the other flank, outside of the fortified farm.[1f]

At nine o'clock messengers reported to Count Martin that the dwarfs had marched through the night and were now forming up in the cover of the woodlands past the Empire's left flank. This was welcome news indeed to the Empire general. Mannfred also became aware of this, but it did not alter his strategy. He still planned to drive a wedge between the two forces.[1f]

However, after several more attempts to take the fortified positions on the Empire's flank, Mannfred had used up all of his reserves and was no closer to encircling his foes. Count Martin only had to give the flanks enough reinforcements to cover their losses, which were minimal.[1f]

"We were about a quarter of a mile behind the Forlorn Hope. All we saw were their backs, braced with their spears held over their heads and the shoulders of the men in front. First the crossbowmen opnened fire, then the archers. Stirland ordered the archers to shoot fire arrows at the bat swarm; they hated fire because fire cleanses. We knew when the undead hit the Forlorn Hope because the line buckled. We saw those men strain every sinew to hold them back. By the gods, how they fought."

At about this time, the main bulk of Mannfred's army began to advance across the plain towards the Empire lines. In response, Count Martin sent orders to the artillery of Thunder Ridge to begin firing. Cheers went up from the Empire army as they heard cannonballs fly overhead and crash into the mass of skeletons and zombies. Simultaneously, a thin line of Spearmen and Crossbowmen advanced onto the raised farm road. Their instructions were to hamper the undead as much as possible.[1f] Termed the Forlorn Hope, the men who advance here were thought to be unlikely to survive. However, those who did survive such a tactic could expect to be lionized by their comrades. The undead mass hit the Forlorn Hope. The line buckled, but did not break. For some time the spearmen and crossbowmen were able to hold back the undead.[1g] 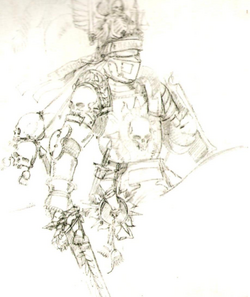 After some time, the undead infantry pulled back out of the engagement. This astonished the Empire's generals until they saw his true ploy: Black Knights and other heavy cavalry appeared from the back and made ready to charge the forlorn hope. However, the Count of Stirland also had a trick of his own. He ordered the heavy cavalry of his army[1g], lead by General Jaeger[1h], to the front, for a countercharge.[1g]

The forlorn hope broke ranks and ran back to Stirland's lines. Mannfred was certain that he would be able to run them down and slaughter them. However, he did not count on the charge of the Empire cavalry, who were at that point still hidden behind the raised farm road.[1h]

Just as both charges were picking up speed, the Empire cavalry leapt over over the farm track. It was then that Mannfred truly realised what was happening and turned and rode his horse away from his undead knights, consigning them to their fate. When the two forces finally collided, the Empire knights struck with fury, breaking the undead riders utterly. Their charge was hardly even slowed as they penetrated deeper into enemy lines.[1h]

At this point, Mannfred ordered his skeletal infantry to surround the knights. Skeleton spearmen advanced around the force, cutting off their escape route. Only then did General Jaeger realise his mistake. He should have stopped and turned around as soon as they had broken the undead knights. But by then it was too late. Jaeger ordered a charge back to the Empire lines, but the cavalry was quickly mired in the mass of undead. Most of the knights did not make it back. Jaeger himself was killed when an arrow hit him in the back.[1h]

"Our Skirmishers fell back before the undead assault, casting aside their weapons and shrieking in fear. Mannfred von Carstein's skeletal horrors followed relentlessly, bony fingers clicked as they gripped tightly their spears. On they marched towards us, skulls grinning in the twilight. But the Count of Stirland was cunning, and the jaws of his trap were about to spring."

As the last of Jaeger's cavalry straggled back to the Empire lines, Count Martin contemplated his position. Although he still had some cavalry, the majority had been wiped out in the ill-fated charge. Meanwhile, reports had come to him that the defenders of the fortress on the right flank were flagging. He determined that it was time to spring the trap.[1i]

He deployed his main line of swordsmen and halberdiers on the raised farm track. In front of them were skirmishers-- archers, crossbowmen, free company militia. Meanwhile, regiments of pistoliers and Knights of the Divine Sword formed up on the flanks.[1i]

Mannfred's army, meanwhile, featured deep regiments of skeleton warriors with skeletal cavalry and dire wolves on the flanks. As it advanced, the Empire's cavalry engaged with the dire wolves, which fled and were driven into Shadow Lake.[1i]

Meanwhile, the skeletal infantry was advancing towards the centre. As they had been ordered to do, the skirmishers threw down their weapons and acted as if they were fleeing in terror. When the undead infantry hit the Empire line, they began moving backwards step by step, drawing Mannfred's army into the trap. When the undead had been drawn into the marshy lowlands past the farm track, trumpets sounded from the Empire soldiers. Heavy infantry and skirmishers poured out from behind the Empire lines, attacking the skeletons at the flanks. The cavalry who had recently finished slaughtering Mannfred's dire wolves crashed into the skeletons' rear.[1j]

Mannfred knew then that he was defeated. He just managed to escape with his unit of wight guards[1j]. Martin of Stirland gave chase mounted on a griffon[2a], and a mighty duel ensued at the marshy banks of Shadow Lake. Mannfred, exhausted from commanding his army, was struck down by a blow from Martin's Runefang. His body sunk into the marsh, and was never recovered.[1j]

Martin's great victory became well known throughout the Empire. He was declared a hero and many statues of him were erected. Sylvania was enveloped into the county of Stirland. Martin lived out the rest of his days a well-respected Elector Count.[1j] Even today, Martin's winning envelopment strategy is studied at the military academies of the Empire.[1b]

It is also said that, because of the amount of dark magic used by Mannfred and his necromancers, the corpses of fallen Empire soldiers still wander the marshes of Hel Fenn as zombies.[2b]

In honour of the of their service during the battle, the Order of Raven Knights were gifted the fief of Siegfriedhof in Stirland.[3a] Meanwhile, every member of the Ostland Black Guard that fought in the battle was awarded the Order of the Thorny Rose[1k]

Martin of Stirland was the chief commander of the Empire's armies. However, he diplomatically gave the other elector counts and dwarfs a say in the decision making process.[2b]

"From out of the forest marched the undead. My horse shied and a thrill of fear ran up my spine. I caught the stench of rotting flesh. More poured out from the forest, endless columns of perambulating skeletons, loping wolves, and the sky became black as a flock of fell bats converged in swirling clouds. And then, we saw him, just a distant smear in the dusk's light, but his outline was unmistakable: Mannfred von Carstein. He threw his arms into the air and lightning trembled and flashed around him. We looked aghast at the size of his army."

The size of Mannfred's army is not known, but historians guess that it was between twenty thousand and three hundred thousand strong.[1c]

Retrieved from "https://warhammerfantasy.fandom.com/wiki/Battle_of_Hel_Fenn?oldid=106549"
Community content is available under CC-BY-SA unless otherwise noted.