Empire army eventually forced to retreat from Middle Mountains
The Battle of Blood Hollow was a military engagement between an Imperial army of Hochland and orcs high in the Middle Mountains.[1b][1c]

Many tribes of orcs live in the Middle Mountains. These raiders are a constant menace to those humans living in the foothills of Hochland. During the springtime of the year in which the Battle of Blood Hollow took place, orc attacks were being reported in greater numbers than usual. These attacks of villages and farms were getting bolder and more brutal as the spring progressed. When word of this reached Hergig, it was initially ignored- there were more pressing matters in the capital of Hochland. However, Baron Eadric Valkin, Grandmarshall of Hochland realized that a campaign against these orcs would be valuable for his men, who had not seen battle all winter.[1b]

Grandmarshall Valkin petitioned Count Ludenhof for permission, but the Elector Count was very wary of sending his armies so far north, leaving the capital undefended. Eventually, he relented, but made it clear that he expected nothing short of total victory.[1b]

After several weeks, Valkin managed to muster an army consisting mainly of infantry and artillery. He had tried to secure the aid of the Knights of Sigmar's Blood, but was unsuccessful. Thus, the only cavalry he was able to field were some Pistoliers and Knights of the Blazing Sun. Although he was troubled by his lack of cavalry, he set off with his army anyway.[1b]

The army headed up into the mountains. The route Grandmarshall Valkin planned lead up over a mountain pass to Brass Keep. Here, he planned to set up a base from which to eliminate the orcs. However, the route was perilous and the terrain was rough. The rocky path wound through pine forests and across scree slopes. The progress of the soldiers, who had not been on campaign for some time, was slow. In particular, the baggage and artillery train lagged behind. After some time in the mountains, it began to rain heavily. Solid ground was turned into muddy quagmires where wagons and cannons became mired. Rockfalls occurred on the open slopes. The column became more and more spread out and distracted. It was in this state that the orcs first attacked.[1c]

Initially, the greenskins used guerilla tactics. The hampered the Hochlanders with missile fire, or made hit-and-run attacks, doing maximum damage before vanishing back into the wilderness. Grandmarshall Valkin sent his knights to guard the most vulnerable part of the army- the baggage and artillery train. Eventually, the army was able to make it over the pass to the valley known as Blood Hollow.[1c][1d]

Blood Hollow is an open valley, about one mile long and a half mile wide at its widest point. The sides of the valley are steep and densely forested, but its floor was open. At the far end, the valley disappeared around a bend. In the middle of the valley was a ramshackle greenskin encampment, little more than a shantytown of crudely built huts. The leaders of the Empire force realized this for what it was: an obvious attempt to lure the army into an ambush. Using this information, the Grandmarshall plotted his strategy with his advisors.[1d]

Valkin initially suggested that a small force of skirmishers be sent to lure the ambushing orcs into the open, where they could be slaughtered by the rest of the Empire army. However, Hermann Fulke, the commander of the artillery, had a better idea. If his artillery were to fire into the woods where the orcs were surely waiting, they could flush them into the exposed valley bottom without having to endanger the lives of any empire soldiers.[1d]

Valkin sent scouts to determine the precise position of the orcs. By mid-afternoon, the artillery train had reached Blood Hollow, and the guns were being put into place. Mortars were positioned on the upper slopes, while cannons were deployed midway up the slope. On the valley floor, behind a line of infantry, was a unit of handgunners. Everything was set.[1d]

"The noise of the cannons was incredible and sheer power of it heartened us enormously. Smoke burst and fire belched and we felt the breeze over our heads - the breath of death - as the solid shot whistled into the trees ahead, splintering them apart and pulping the orcs who cowered behind hem. The enemy was broken and we had yet to even draw our swords."

The cannons were the first to fire. Loud explosions rang across the valley. The cannons spewed forth smoke and rocked in their carriages. Even as the cannonballs were crashing through the trees, the artillerists were swabbing the bore, readying another shot. Then the mortars opened fire, lobbing their explosive shells into the forest, splintering wood and pulverizing orcs.[1e]

Fulke's men were well-drilled, and were able to fire a constant bombardment at the enemy. Hermann Fulke himself strode among the artillery, cajoling or bullying his men into working faster. So intense was the barrage that within minutes, the first orcs were sighted exiting the forest. Some were wounded, but the rage of a wounded orc can be deadly. Howling, they charged the Empire lines, which parted to reveal the handgunners. Those charging orcs were cut down by the volley of handgun fire.[1e] 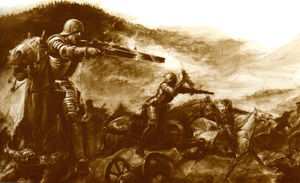 By this time, Grandmarshall Valkin felt that enough of the orcs were out in the open to warrant a cavalry charge.[1e] Lead by Karl Benz, the pistoliers were intent on crushing the orcs. As they charged, the whooped and hollered. The foremost orcs were too dazed to even know what hit them, as sabres slash and pistol shot tore through the enemy. As soon as the pistoliers hit the orcs, they began to flee. If Benz had had his wits about him, he would have ordered a halt. However, too caught up was he in the glory of the charge that he failed to consider his own vulnerabilities. Instead, the pistoliers continued charging, deeper and deeper into enemy territory. As they reached the bend in the valley, where the sides steepened and the floor narrowed, they were ambushed by hundreds of enraged orcs, some mounted on war boars. By then, Benz had realized his mistake, but it was far too late. The horses were tired, and the angered orcs began attacking the pistoliers before they could retreat. Only a few of the riders, lead by Benz himself, were able to avoid the slaughter and return the Empire lines.[1f]

The obliteration of the pistolier contingent eventually lead to the downfall of the Empire army. As they headed further into the mountains, they were constantly harried by the orcs, who were emboldened by their destruction of the pistoliers. Elements of the army were attacked individually and destroyed, one after another. Eventually, the entire battle force was defeated.[1f]

Retrieved from "https://warhammerfantasy.fandom.com/wiki/Battle_of_Blood_Hollow?oldid=97889"
Community content is available under CC-BY-SA unless otherwise noted.