Warhammer Wiki
Register
Don't have an account?
Sign In
Advertisement
in: Altdorf, B, Chamon,
and 10 more
English

"Welcome to Estalia, gentlemen. I will not lie: the chances of your survival are small. Some may even turn against your friends as living corpses. But you have my word, that I will use my arcane gifts to ensure your bodies are given unto Morr's garden. This is the greatest reward, more than even gold, for the fate of your soul is an eternal concern. Now come, follow me: Strike down the undead that rise against us, allow me to find this eldritch amulet! I ask not for my own selfish studies, but for the good of the Empire!"

Every few years each of the eight Colleges of Magic elect one of their number to duel with an equal counterpart. The victor of this arcane duel receives the office of Supreme Patriarch and the right to wield the ancient Staff of Volans.[1a]

Balthasar Gelt is the most recent winner of this exalted position. Such is his skill in the art of magic that he managed to defeat the former Supreme Patriarch, Thyrus Gormann of the Bright Order, in single combat, replacing the long-standing prominence of Fire within the Colleges with that of Metal.

Since that day, the new Supreme Patriarch, riding a Pegasus surrounded by a golden halo, has appeared on many battlefields where the Emperor's soldiers are fighting. Now the Winds of Magic blow strongly for the Gold College as their fortunes are once again on the rise.[1a]


—Balthasar Gelt, The Training of the Alchemist.[2a]

Balthazar Gelt came to Altdorf from the seaport of Marienburg having bought passage on a merchant ship with gold that he had transmuted from lead ingots. He left the seaport for the Colleges of Magic before the effects wore off, and now rumours abound that the swindled sea captain has placed a rich bounty on Balthasar's head, though few would dare to attempt to collect it.[1a]

The transmutation of common artefacts into precious metal has always fascinated Balthasar. Driven by his obsession, he spent many years combining his knowledge of alchemy, learnt in far-off lands, with the magical Lore of Metal.

Balthasar's fierce intelligence lent him a greater understanding of this branch of magic than any of his fellow students or tutors, and he rose quickly through the ranks of the Gold Order. Within a mere decade, Balthasar Gelt had become the Patriarch of the Golden College, the youngest wizard to ever hold the position.[1a]

Balthasar's research into new formulations of black powder even made him popular with the Imperial Engineer's School, an organisation that often dismisses magic as superstitious nonsense. However, during his studies, a freak explosion almost ended Balthasar's quest for knowledge forever.

Somehow, he survived and from that day on he has only ever been seen swathed in shimmering, metallic robes and wearing a golden face mask. Some say that beneath his mask his skin has turned to pure gold, while others whisper that he is horribly disfigured, though the truth of the matter is known only to Balthasar. One thing is certain; the accident only furthered his will to succeed, and his determination increased his powers to new heights.[1a]

Gelt leading Men against the Undead 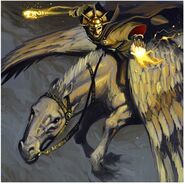 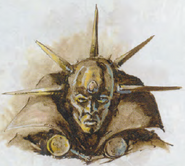