Warhammer Wiki
Register
Don't have an account?
Sign In
Advertisement
in: A, Asur Princes, Characters,
and 6 more
English

"By what right do you enter these lands without the permission of Alith Anar, lord of house Anar, Shadow King of Nagarythe? If you come to treat with me, hear my oath to the dead. Nothing is forgotten, nothing is forgiven!"

Alith Anar, also called the "Prince of Nagarythe" and the "Shadow King," is the current ruler of the Kingdom of Nagarythe and the last member of the noble line of House Anar. Tradition maintains that the Nagarythi chose Alith Anar as ruler after Malekith fled into the west. The lord was the last heir of a great line, his forebears having been slain by the Witch King's minions. In those days there were many Dark Elves still hiding in Ulthuan, and Alith Anar took to their eradication with a bloody vengeance. Those of his foes who were not killed in battle were crucified upon trees, where those who passed could witness their grisly fate, and as he attacked and burned each enemy encampment, his fame grew.[1a]

None know Alith Anar's final fate. The Shadow Warriors believe he still walks the world, a restless spirit of vengeance. They tell that on the darkest night of the Season of Frost, a grey-garbed figure can be seen kneeling before Eothlir's tomb, head bowed in silent contemplation of the bloody deeds the coming year will bring. Other High Elves scoff at such tales, but few amongst them would not wish to be proven wrong. For his part, the Witch King has passed beyond the veil of mortal concerns, but if Malekith any longer fears anything, he fears the vengeance of Alith Anar.[1a]

"When you look at your foe, do not see another elf. See them for what they are; creatures less than animals. Remember that your enemy is responsible for all of your woes. It is he that cast you from your homes, tortured your friends and slaughtered your families. You can have no compassion for those you will slay, for it will be rewarded by failure. Hesitation is death, doubt is weakness. The druchii tore your lives from you and threw them upon sacrificial pyres, and anointed their priests with the blood of your kin. The ghosts of the fallen wander Mirai, wailing in grief for the wrongs done to them, pleading with the living to avenge them!"

Aenarion's court, following his marriage to Morathi became a place of simmering evil, and it was here that the Cults of Excess festered in the reign of Bel Shanaar. During the rise of the first pleasure cults, Morathi declared herself Queen of Nagarythe in Malekith's absence.[2a]

The Anars were one of the greatest supporters of Malekith, and were instrumental in retaking Anlec from Morathi. When the Nagarythe threw their lot in with Malekith, it was from these decadent and perverse nobles that he drew most of his power. They were veterans of the wars against the Daemons of Chaos and many powerful sorcerers filled their ranks.[2a]

Not all the Nagarythe joined Malekith's rebellion against the true Phoenix King, however. Many High Elves had been appalled by the depravity ushered in by Morathi, and further sickened by Malekith's betrayal. These brave souls were the first to bear the brunt of the Witch King's assault, and their homes and their lives were quickly destroyed.[2a]

The Rise of the Shadow King

"Do not long for peace, for there can be none while any druchii still draw breath. Embrace war as the crucible of your valediction, the means to purge this stain upon our people. Swear oaths of vengeance, not to me or your companions or to the uncaring gods, but to fallen mothers and fathers, dead sisters and brothers, slain sons and daughters. Take the darkness that the druchii have created and rob them of its power. You are the blade that will strike down the wicked. You are the shadow warrior, the faceless bringer of justice."

The greatest hero of Nagarythe, was Alith Anar — the Shadow King. A son of one of Nagarythe's noblest households, his family immediately joined the fight to protect the true Phoenix King and many loyal Nagarythe rallied to join him. At the Battle of Dark Fen, the loyal Nagarythe stood before the mighty hosts of the Dark Elves.[2a]

On one of the first battles of Malekith's rebellion, the loyal Elves were outnumbered three to one and their foe were battle-hardened and cruel. Eothlir, Alith Anar's father, was an expert tactician, and the Archer and Spear regiments who fought for him outmanoeuvred the Dark Elves for long hours. Hundreds of Dark Elves died crossing the fen, black fletched arrows claiming their lives, before the battle lines met.[2a]

Crazed Dark Elf warriors tore into Eothlir's regiments, but even then it seemed that the loyal Elves could prevail. With his household at his side, Eothlir held firm. The proud banner of the Anars fluttered just a moment longer before it was crushed beneath the immense bulk of the Dark Elf general's Black Dragon. As Eothlir was savaged by the mighty beast, a ripple of panic spread through the Elf army. As he fell to the ground, blood bubbling between his lips, Eothlir cried a warning to his son, Alith. "Flee!"[2a]

Few of Alith Anar's folk survived that battle, and they were harried through the fens and marshes for long weeks, until the Dark Elves grew tired of the search. When at last they came out from hiding, Alith Anar and his companions found their ancestral home a ruin, and scores of the elderly and innocent lying dead. There he learned that his grandfather, Eolaran, had been taken to the dungeons of Anlec - he was never seen again.[2a]

Alith Anar and his warriors swore terrible oaths of vengeance that day. They launched brutal ambushes on the armies of Malekith, butchering messengers, destroying supply chains and disrupting the flow of reinforcements. They joined many of the mightiest battles of the age, and it is said that Caledor the Conqueror thanked Alith Anar in person following the Second Battle of the Ellyrion Plains.[2a]

There the Dark Elf army boasted scores of Reaper Bolt Throwers and the carnage they wrought upon the High Elves was terrible. As the Witch King's army advanced, however, the Reapers fell silent one after another - Alith Anar and his loyal warriors emerging from hiding to overrun their crews. The fighting was brief and one sided, the Shadow Warriors leaving the delicate war machines in ruins.[2a]

When the Witch King and his mother, Morathi, fled Ulthuan into the west, the remaining few nobles of Nagarythe turned to Alith Anar to lead them. Their land had been ruined, flooded by the madness of the Sundering and their reputation was in tatters. The Elves of other lands now viewed them as tainted — pariahs barely better than the Dark Elves they had fought against so courageously.[2a]

That night, in the shattered groves beneath Dragon Pass these few nobles swore a pact of obedience to Alith Anar. Each Elf from Nagarythe's great families took an oath of blood that they would not rest until they had destroyed Malekith and all of his followers. They became the Shadow Warriors, and Alith Anar was their lord, the Shadow King.[2a]

"We are ready. The wait is over, the fighting begins anew. By dawn we will be heading towards Tiranoc and war. I will not ask you to follow me, for you have all proven your loyalty to our cause. I will not exhort you to acts of bravery, for you have all shown great courage to be here. I will only say that this is our moment of truth. Let the princes of the east fight their great battles and hurl the lives of their subjects away in futile resistance. It is here, in the west, that this war will be won. We fight for loved ones lost. We fight for futures blighted. We fight to reclaim a land that was once gloried above all others. We fight for Nagarythe!"

In the wake of the Sundering, there were many Dark Elves still hiding in Ulthuan, and the Shadow Warriors busied themselves rooting out these remnants of evil. This was a task that Alith Anar and his warriors undertook with a vengeance and soon there were few of the Dark Elf reavers who did not know and fear his name. Each time his warriors slaughtered a Dark Elf encampment, his notoriety grew. None were ever spared; those that survived the fighting and were foolish enough to surrender or flee were captured and then massacred as a sign of the Shadow King's passing.[2a]

After the Battle of Griffon Pass, Alith Anar captured seven hundred Dark Elves and had them nailed high upon the white cliffs overlooking the narrow valley, where they hung until they died, and then their corpses hung for years afterwards until their flesh rotted and their bones tumbled into piles beside the road. Such is the dark power of the place that these bones can be seen to this day, together with the red marks left by Alith Anar's iron nails upon the cliffs.[2a]

Later Alith Anar led his followers against the newly raised fortresses of Naggaroth. In the bleak lands of the northern New World, the Shadow Warriors became a serious thorn in the Witch King's side, harassing his ships, ambushing his warriors, and plundering his convoys. There was nothing the Shadow Warriors would not dare.[2a]

It was said that Alith Anar once danced in disguise with Morathi at the court of the Witch King before stealing the Stone of Midnight from her treasury. He then outwitted the Witch Elves sent to hunt him down, tricking them into drinking poison mixed with blood before escaping into the wilderness.[2a]

The Shadow King made a mockery of all the sorcerous wards and guardians of the Hag Queen; and Morathi has promised the gift of eternal youth, an entire room filled with gold, and a night spent with the most beautiful of her Witch Elves for anyone who returns her treasure. But even the bravest of the Dark Elves fear to hunt the Shadow King.[5a]

As to the final fate of Alith Anar none can say. His heirs have ruled the wandering folk of Nagarythe ever since, though none have taken the title of Shadow King, which remains his alone. They are the Aesanar, the sons of Anar and even the Phoenix King has never knowingly met nor spoken to them.[2a]

These grim scions of the Shadow King still fight their eternal war against the Witch King and his followers, true to the oaths that their ancestors swore thousands of years ago. Around the campfires of the Shadow Warriors, the true sons and daughters of Nagarythe still speak of Alith Anar as a living warrior, an Elf of the shadows, a mortal spirit of vengeance, bound to walk the earth until the Witch King is laid to rest.[2a]

As a follower of the Trickster God, Loec, the Shadow King is a master of deception and distraction. On the battlefield, he is a revenant who seeks the grisly death of every Dark Elf in retribution for Malekith’s sins.[4] 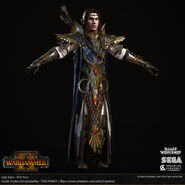 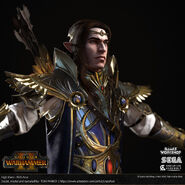 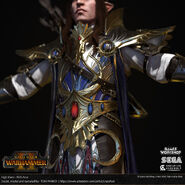 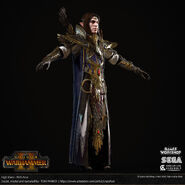 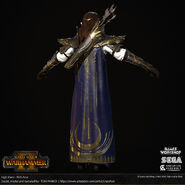 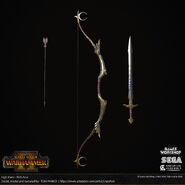 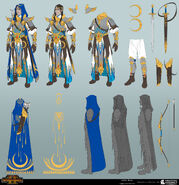