You can find Chaos Dwarfs in Norsca, usuakly working for tribes as part of a trade agreement between the two. Dwarf gets slaves, tribe gets weapons. Other than thar I'm uncertain if they ever leave their "home-away-from-home".

A reply to Vampire Bram
2

Well a Black Ark is not accompanied by traditional vessels, but instead by sea wyrms and the like. Dark Elves a prideful bunch in the sense that they do not believe in commanding a ship when they can bend the beasts of the ocean to their will.

Essentially, a Black Ark itself is a large fortress-sized chariot being pulled along by one or several sea wyrm(s).

As for docking, a Black Ark as far as I know would have ramparts and the like from which the army inside moves out. I know little on this subject though, they could be teleported out for all I know.

As for not getting stuck in shallow waters? Beats me man, I don't know how they do it. Poncy Elves like their secrets.

Kislev, for sure. I'd like to see those vodka-slurping streltsi get some love

The problem with Mortal Empires is usually performance and such. Total war Warhammer isn't exactly the most well-optimised of total wars so I can see why some would prefer the first game for an authentic old world experience. Its just a shame that CA doesn't update the first game with the same overhauls that 2 gets, but I suppose that's how they wrangle jn their money.

The Throt and the Thot

Vlad "The Chad" von Carstein for me

I mean, even arguably the most powerful factin in the world (the elves) couldn't fully stop Chaos at its height. They could only contain it with the Great Vortex. The only ones with the power to stand a chance at fully eradicating chaos from the world were the Old Ones themselves, and in the end, even they decided to abandon it.

Yeah that was for Grom and Eltharion's DLC

A reply to Emperors Potato, Lord of Dawi and Spuds
3

"Yoo'z betta eat only a spoonful, ya runty squig."

A reply to Dhong Manondo
2

It depends how thoroughly the necromancer "teaches" the undead in question. Zombies and most undead just copy orders given to them (hence why they make good guards), so technically you could teach one to operate and use firearms and the like, but its quite rare as most simply use zombies as meat-shields due to how easy it is to raise them.

There's a mod which adds in a pile of skulls next to a unit's porthole, and it increases depending how many kills the unit gets. That's my favourite.

A reply to Jonathan Newton
1

Yep, a skaven said that. He is either incredibly intelligent, or ancient enough to have a grasp on the language. He's a Warlock engineer after all, so he might have a bit more brains than most.

They have slaves. A barbaric prospect but well, the other alternative is to feast on rocks and lava.

They already have. Cylostra Direfin was a completely new character created by CA. In my opinion, as long as its plausible and serves an end for the faction its in, I have little qualms about it.

A reply to Emperors Potato, Lord of Dawi and Spuds
1

Must be some bad cheese then good lord 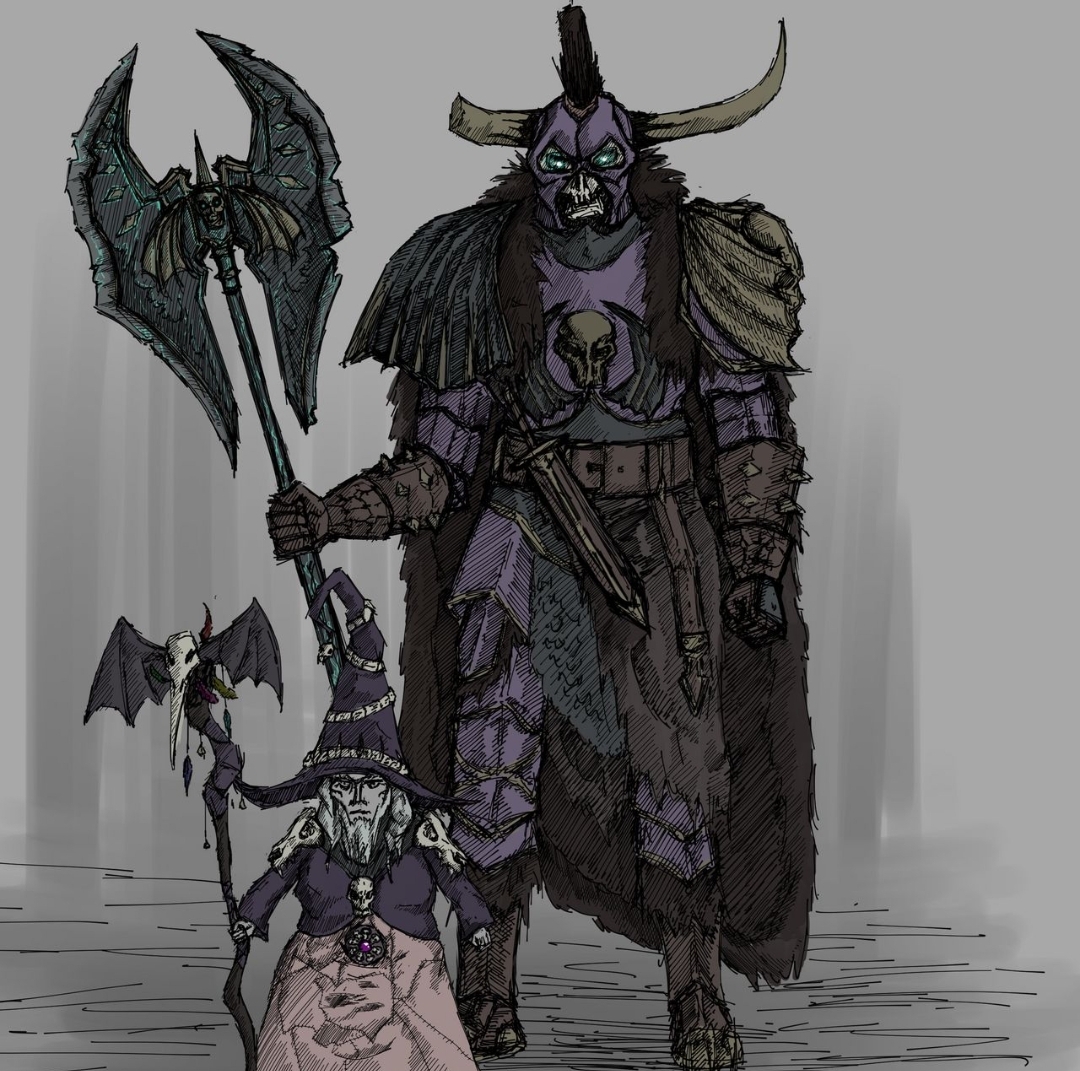 K&K for me. An undead ex-chaos warlord and a madly powerful necromancer on a quest to rule the world? Sounds pretty villainous to me.

The flaw of gromril lies not in its material, but in its design. The dwarfs only ever use gromril as plates, as in plated armour, for reasons undoubtedly related to old traditions and the like. While nearly impervious of course, this means a particularly agile combatant could very easily strike at chinks in the armour and wear the dwarf down that way.

Greasus is powerful, imposing, even. But Grimgor would still win a 1v1 duel, and my reasoning is the fact that greasus has to be physically carried by a horde of Gnoblars due to the sheer size of the lad, and Grimgor is perfectly mobile. Not that grimgor is particularly fast, but in terms of speed between him and greasus, Grimgor may as well be an elf.

And if the Gnoblars were removed from the eqyation, well, greasus would be more or less immobile. Powerful, but immobile.

I think you could see why Grimgor would win that particular battle. 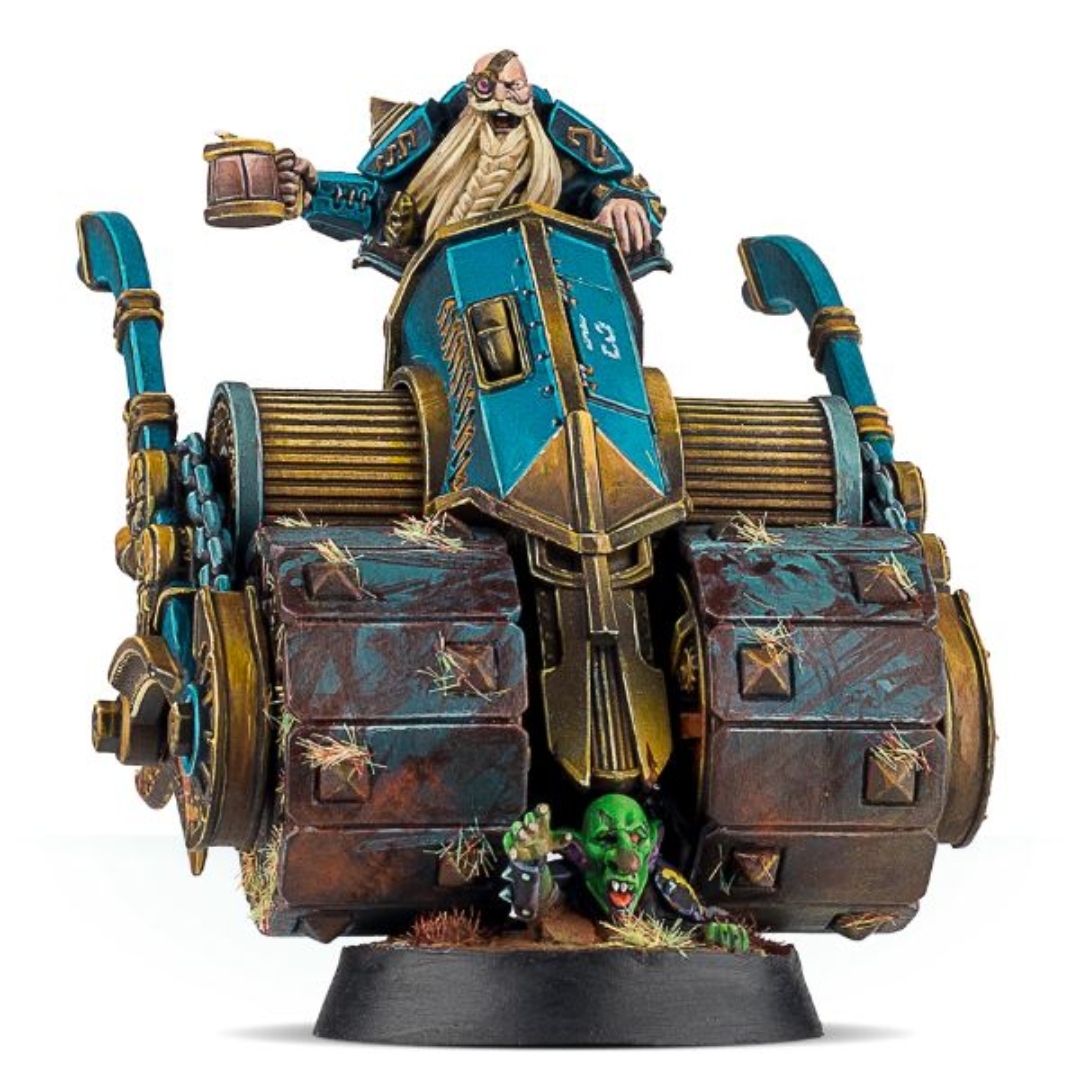 I don't care if its from Blood Bowl, I'll take a Deathroller please.

A reply to Jonathan Newton
3

16 - High Elves - I do not believe I should have to explain this.

15 - Wood Elves - They're just Highe Elves Lite edition, taking the worst traits of the Dark Elves and High Elves and mixing them into a stewpot of Elven roguery

14 - Beastmen - I do not hate Beastmen, or dislike them really, I just think as a faction they are quite weak.

13 - Chaos Dwarfs - They're okay. I have nothing bad but not much good to say about them either.

11 - Chaos Daemons - While I like Khorne Daemons and Nurgle Daemons, but overall Daemons are a bit average. I prefer them as a looming danger on the edge, the real end-game type stuff, but in general I find them a bit weak sometimes compared to others.

10 - Lizardmen - They're cool but they don't interest me as much as other factions.

8 - Tomb Kings - Settra is what saves this faction in my opinion. He is the Great King, the Imperishable, Khemrikhara, The Great King of Nehekhara, King of Kings, Opener of the Way, Wielder of the Divine Flame, Punisher of Nomads, The Great Unifier, Commander of the Golden Legion, Sacred of Appearance, Bringer of Light, Father of Hawks, Builder of Cities, Protector of the Two Worlds, Keeper of the Hours, Chosen of Ptra, High Steward of the Horizon, Sailor of the Great Vitae, Sentinel of the Two Realms, The Undisputed, Begetter of the Begat, Scourge of the Faithless, Carrion-feeder, First of the Charnel Valley, Rider of the Sacred Chariot, Vanquisher of Vermin, Champion of the Death Arena, Mighty Lion of the Infinite Desert, Emperor of the Shifting Sands, He Who Holds The Sceptre, Great Hawk Of The Heavens, Arch-Sultan of Atalan, Waker of the Hierotitan, Monarch of the Sky, Majestic Emperor of the Shifting Sands, Champion of the Desert Gods, Breaker of the Ogre Clans, Builder of the Great Pyramid, Terror of the Living, Master of the Never-Ending Horizon, Master of the Necropolises, Taker of Souls, Tyrant to the Foolish, Bearer of Ptra's Holy Blade, Scion of Usirian, Scion of Nehek, The Great, Chaser of Nightmares, Keeper of the Royal Herat, Founder of the Mortuary Cult, Banisher of the Grand Hierophant, High Lord Admiral of the Deathfleets, Guardian of the Charnal Pass, Tamer of the Liche King, Unliving Jackal Lord, Dismisser of the Warrior Queen, Charioteer of the Gods, He Who Does Not Serve, Slayer off Reddittras, Scarab Purger, Favoured of Usirian, Player of the Great Game, Liberator of Life, Lord Sand, Wrangler of Scorpions, Emperor of the Dunes, Eternal Sovereign of Khemri's Legions, Seneschal of the Great Sandy Desert, Curserer of the Living, Regent of the Eastern Mountains, Warden of the Eternal Necropolis, Herald of all Heralds, Caller of the Bitter Wind, God-Tamer, Master of the Mortis River, Guardian of the Dead, Great Keeper of the Obelisks, Deacon of the Ash River, Belated of Wakers, General of the Mighty Frame, Summoner of Sandstorms, Master of all Necrotects, Prince of Dust, Tyrant of Araby, Purger of the Greenskin Breathers, Killer of the False God's Champions, Tyrant of the Gold Dunes, Golden Bone Lord, Avenger of the Dead, Carrion Master, Eternal Warden of Nehek's Lands, Breaker of Djaf's Bonds... and many, many more, and he is what makes this faction so great.

7 - Dark Elves - Malekith is the rightful king of Ulthuan, debate me, I know I'm right

6 - Greenskins - How can you not love Greenskins? They are one of the most deadly of races, but that is offput by their majestic sense of humour and their brilliant wit. They are the most cultured, the most advanced, the most bellicose barbarians in all the world, and they're pretty good.

5 - Vampire Counts - I like Vampires a lot. It does depend on the bloodline but overall I find them to be cool, especially the Blood Knights, the Necrarchs, and the Von Carsteins. The best thing about the Vampires is probably their characters. They have some of the best characters, like Vlad and Abhorash just being CHADS, one planning to conquer the Empire and the other just casually drinking dragon's blood like it ain't no thing. They're pretty good.

4 - Bretonnia - I like bretonnia a lot. They're lovely and wacky and over-the-top and they smack of satire and I love every bit of it. The Knights Errant who're basically walking Monty Python references, the surly peasants, the YEW SHALL NOTTE BLIGHTE MY HONEUR attitude of the Grail Knights, and cow trebuchets. And then on top of all that you've got the sprinkling of Arthurian themes with a high-medieval aesthetic? That's some good shit, and even though its very vanilla stuff, in such a grimdark universe like warhammer, Bretonnia's simplicity is very refreshing.

3 - Skaven - Skaven are a lot like orcs to me. Both are innumerable, both are the banes of man and dwarf alike, and both are often treated quite humourously. But the similarities end when you remove the humour. Orcs are dangerous, yes, deadly. But they are simple barbarians. They will kill you and destroy your home and move on. Skaven are far more insidious, and to be quite honest Skaven terrify me far more than Greenskins ever could. They gnaw at the edges of man, slowly taking him apart piece-by-piece in a devilish fashion. The Orcs are driven by simple rage, an animalistic mindset to kill and burn. But Skaven? There is a method to their madness, they operate driven not by rage but by pure verminous evil, and I don't think words could possibly explain how repulsive I find the Skaven, or how insidiously repugnant they are.

2 - CHAOS WARRIORS BABY OOOOH YEAAAH- Okay, the reason why I love Chaos Warriors is because of Norsca and Norsca is ooooooooh shit man Norscans are straight up all badass. They're like every Norse myth and legend rolled into one and every single one of them is like Conan the Barbarian, they're fookin' legends. The best part is the Viking vibes they have. Raiding, looting, Killing for THE GODS and not fearing death whatsoever, because even if they die in combat they will spend their afterlife at the table of the Gods, drinking and feasting. There is no better life.

And, of course, floppy hats.

Every part of the Empire is glorious, so much so that I could not explain my single favourite part. Sigmar? Is pretty damn awesome. Ulric? He's pretty great too. And then there are the provinces, oh the provinces. Every Imperial province is so unique and varied, I love it. The simple-minded Stirlanders, the foppish Reiklanders, the austere and proud Middenlanders, the stubborn and unerring Ostlanders, each and every one of them mixes perfectly together and complements each other. Its such an interesting mix and I love seeing it. From an aesthetic perspective, they are king. Floppy hats, puffy arms, handgunners and 15th century tactics make them really stand out, especially in comparison to other humans in fantasy worlds.

They are the kings of warhammer, and they are in my opinion, the best faction.